The Amateur Radio Experimenters Group was formed in July 1998 with the aim of promoting experimentation and self learning using Amateur Radio. 20 years on, the group is a vibrant and active body that has brought together people from many walks of life, all with the common interest of experimenting and learning about radio and electronics.

One of the founding project ideas conceived by Adrian VK5ZBR, Ben VK5BB and Rod VK5UDX that drove the creation of AREG was project “Skyhook“. The aim, back then, was to fly an amateur radio payload under a weather balloon. For various reasons that goal was never achieved. However, through Project Horus (which joined AREG several years ago under the then stewardship of Terry VK5VZI), that original dream became a reality. 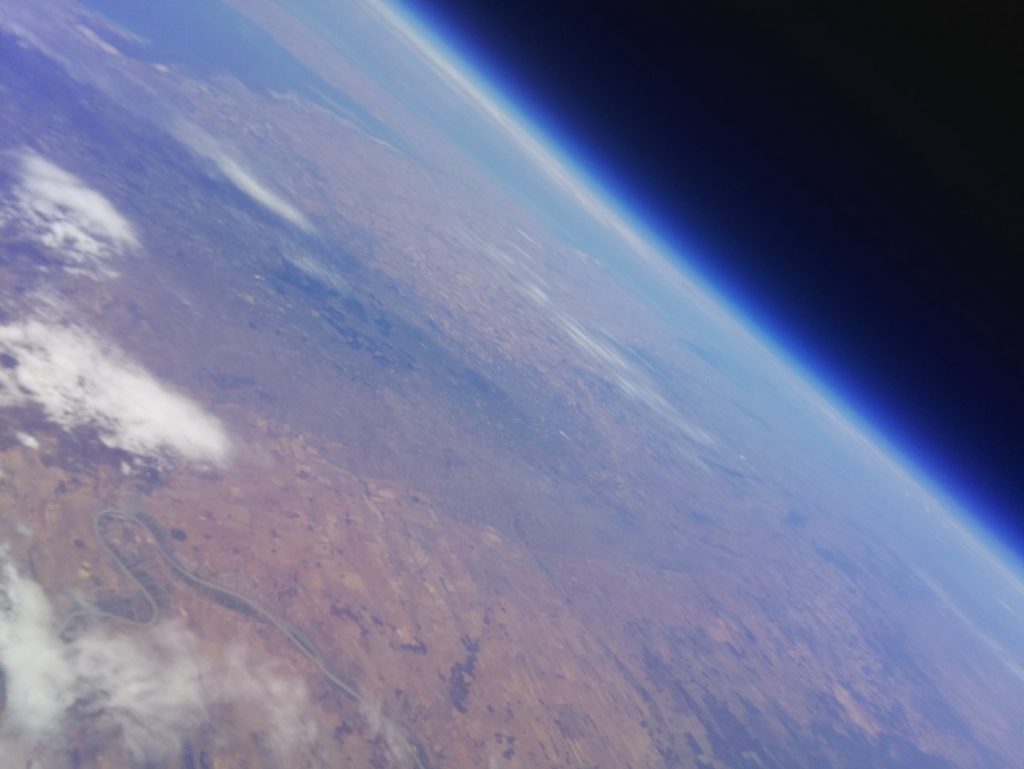 This flight marks Project Horus’s own milestone, having now launched 50 “heavy – 30km plus” balloons over 8 years. In that time it has become one of the most active amateur high altitude balloon projects in Australia.

To commemorate both the 50th flight and the 20th anniversary, AREG and Project Horus have decided to fly an all Amateur Radio oriented payload, promoting our core experimentation theme. The aim was to maximise involvement of the amateur radio community in the project. Here is the story of that flight.

The launch crew arrived on site at Mt Barker High School by 8.30am ready to prepare the payloads and the balloon. Mark VK5QI who was flight lead was assisted by a number of AREG members including Will VK5AHV, Andrew VK5AKH, Theo VK5IR (first time Horus hunter), Kim VK5FJ, Marcus VK5WTF, Oly VK5XDX, John VK5BJE and Grant VK5GR with a number of other visitors and members who came along to watch as well. Assembly of the balloon train went to plan and, with relatively calm conditions prevailing, the filling of the balloon went smoothly too.

After the obligatory calls to Air Traffic Control, the team was set and the balloon took to the skies on schedule at 10.00am ACDT.

In support of the flight, another AREG team had set up camp approximately 50km away at Bear Rock Lookout, up above Palmer on the eastern edge of the Mt Lofty ranges. Manned by Peter VK5KX and Matthew VK5ZM, this ground station provides a vital backup telemetry link, gathering all of the signals from all of the payloads and uplinking them to the internet for the chase teams to use.

This data, when mixed with the rest of the information being received by amateurs across the state, is used by the chase teams to help fill in any packets they miss from the balloon, improving the accuracy of their landing predictions and providing a safeguard for the landing positioning data.

Meanwhile the second ground team, consisting of Grant VK5GR and Oly VK5XDX, went to the top of the ranges above Brukunga to establish VK5ARG net control for this flight’s voice repeater. We weren’t able to collocate these teams as the UHF high power up-link would have overwhelmed the tracking data down-links.

Once the balloon took off, the Mt Barker based chase teams packed up the launch site and prepared to head out. Meanwhile Darin VK5IX also started the chase, in his case also from the Bear Rock lookout. There were a few new chase teams this time which was great to see! The teams were:

It was great to see more people getting out chasing!

There were many ways to track the flight. The usual balloon telemetry collection site was in full swing at habhub.org where all four payloads were being tracked. Amateur Radio operators and the general public could also track this flight via the Amateur Position Reporting System (APRS) on websites like aprs.fi 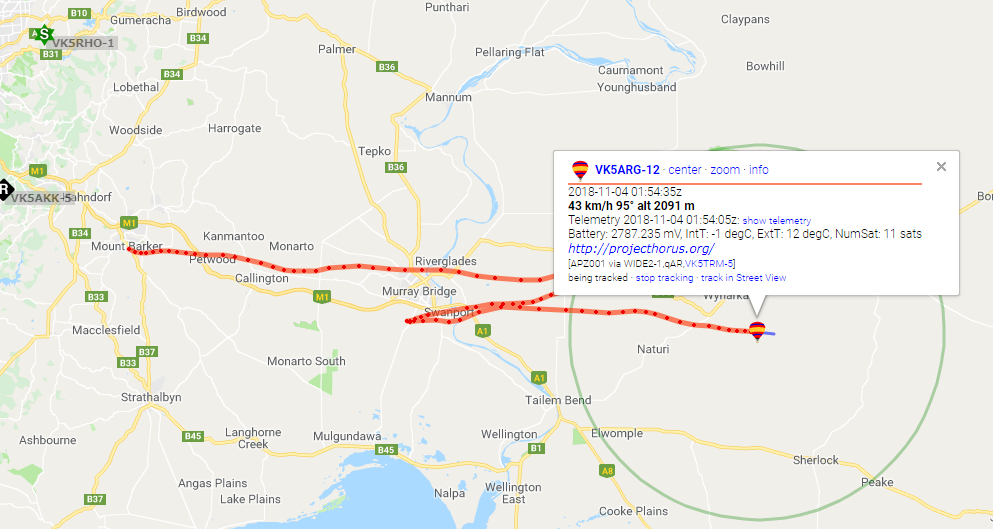 The other very important aspect of the flights is the data collected by the distributed listener network of amateur radio enthusiasts spread across the state. This adds a huge level of reliability and redundancy to the system that the project team really appreciates. It also gives everyone an opportunity to contribute to the project, even if only from their own radio shacks.

The interest in this flight was very high and there were many first time listeners as well as many regulars tune in and gather the telemetry off one of the RTTY or 4FSK payloads, as well as through the APRS Internet Gateway network. 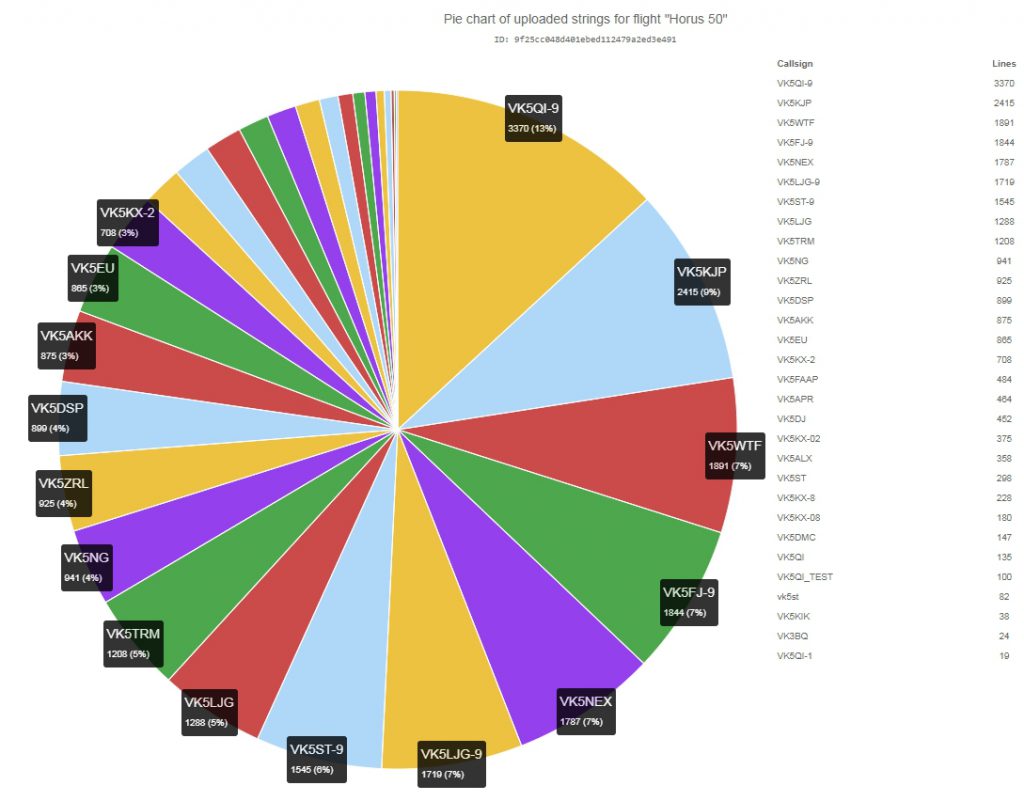 In all of these a special mention goes to Andrew VK3BQ who takes the prize for the most distant telemetry decoding station at over 600km away in Melbourne.

Here are the results of how much telemetry each station was able to contribute (Note – This is per-callsign used when uploading, so some stations may have duplicate entries):

A huge thank you to everyone who collected the telemetry!

This telemetry stream also allows us to analyse the path the balloon took and to confirm the flight’s vital statistics:

Not all plain sailing for the telemetry

The flight was not without it’s gremlins either. The 4FSK binary telemetry payload, which was a recovered Vaisala RS41 Radiosonde that has been re-programmed for use on 70cm, lost PLL lock at 13km on descent, and regained it at 9km altitude (about 6 minutes later). The air temperature at 13km was <-60 degrees C according to the morning BOM radiosonde launch, and -40 degrees C at 9km. The team suspects that the payload froze for a period due to it running lower power than it would for a normal sonde launch, thus not generating enough internal heat to keep from freezing. It is hoped to test this out sometime in the towards the end of the month with a small test launch carrying the same payload but running 3dB more TX power along side another RS41 PCB in a custom foam box (similar to our RTTY payload boxes).

The LoRa tele-command payload also had a fault where it lost GPS lock for the second half of the flight just after burst, likely due to it getting knocked around due to the huge dynamic shock that ripples through the payloads when the balloon bursts. This time, the GPS unit took 20 minutes to regain lock, probably because it was falling so fast (~20-60m/s). The team will be investigating some better AA battery holders, and possibly putting a big capacitor across the power input to hold up the GPS through that very dynamic part of the flight.

It goes to show, every flight is an experiment and that the team learns something new every flight!

The main attractions of this flight, of course, was the flying voice repeater and the first flight of the Slow Scan TV transmitter.

The live pictures broadcast over Slow Scan TV were a spectacular success, with amateurs across VK5 and VK3 able to receive them using all manner of tools and systems. The SSTV signal, running 250mW used what is known as Scottie 2 format (commonly used on HF).  For the first time these images were accessible to almost everyone without any special software (which the previous high definition Wenet SSDV picture system does require). This helped generated an unprecedented interest in the flight.

We had clubs and individuals from the Riverland, South Coast, across Adelaide, and in one case from as far away as Melbourne all receiving the SSTV transmitter.

Rick Kearsley (from the South Coast ARC) received SSTV images from Horus 50 from Normanville SA with  by VK5LEX/P and VK5VCR/P.

In the Riverland, Peter VK5PE and Ivan VK5HS joined in the fun.

AREG also received copies of the pictures received by Steve VK5SFA and Liam VK5LJG and know of several others in Adelaide who also successfully received the images live from the balloon (including our primary ground station at VK5KX/P, who received one only 500ft off the ground). 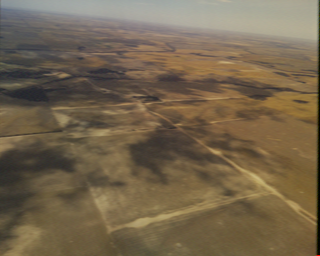 The best effort award however must go to Alan, VK3DXE who from the eastern side of Melbourne was able to receive the SSTV transmitter at apogee using his EME station. Not a bad effort for a 250mW FM transmission on 145.1MHz at over 630km range.

VK3DXE Receiving Horus 50 SSTV from Melbourne over 600km away

This was the array Alan was using. 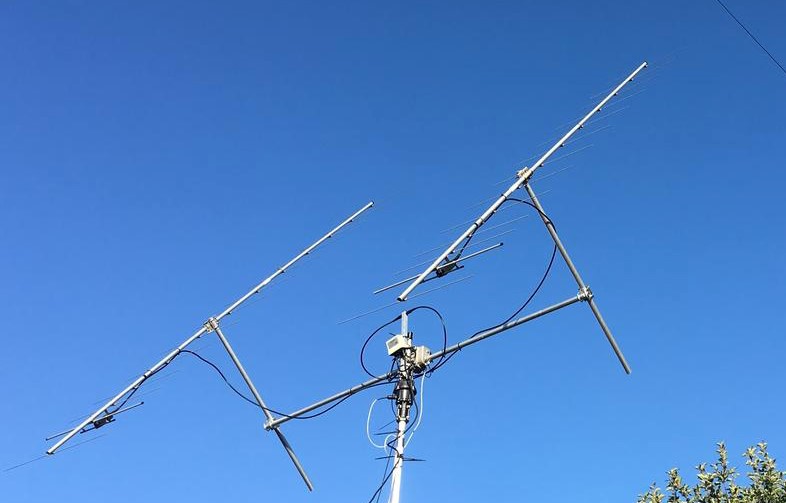 From the balloon’s perspective we also kept a copy of the images on the SD card. This is what they looked like prior to broadcast.

The other amateur radio related payload flown was a cross band voice repeater. This machine had a receiver on 438.900MHz (with a 123Hz CTCSS tone) and a transmitter on 147.500MHz running approximately 1 Watt. This was a return to the original voice repeater flown back on Horus 9 and 23 after the problems with narrow band FM on the more recent repeater flights.

During the flight, it became clear that this old machine still had some problems. Unfortunately the faults didn’t reveal themselves until after lift off. The repeater was de-sensitising its own receiver (a suspected 3rd harmonic problem), and with the rather windy flight aloft, there was also a lot of swinging around of the antennas (TV Ribbon J-Pole antennas) which made contact very difficult to achieve through the balloon. None the less, 32 contacts were logged through the repeater by stations from as far as Millicent in the SE, Renmark in the NE and Whyalla / Port Pirie in the Iron Triangle to the NW. 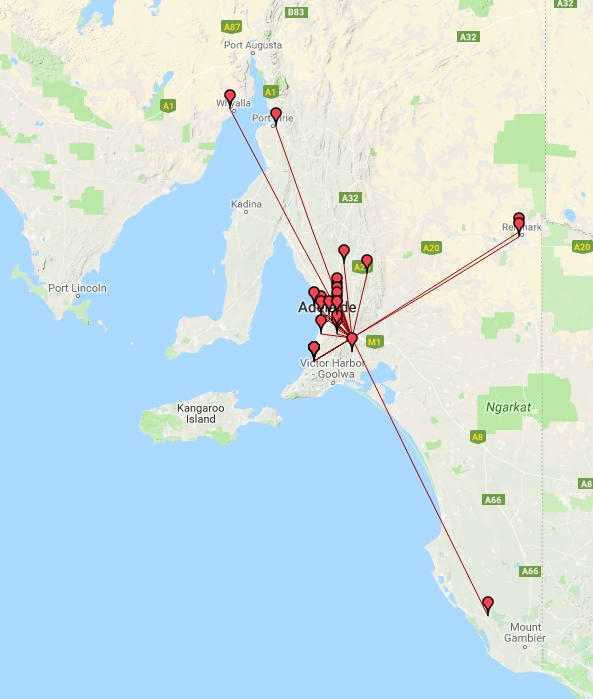 The following is the full log of the contacts made through the balloon with net control.

As sure as the laws of gravity go, what goes up must come down! The balloon climbed to over 35km before bursting and returning to earth. The following are the vital statistics of this flight:

The chase teams themselves were in an excellent position to recover the payloads and indeed watched them land from about 1km away. After contacting the land owner (to seek permission to enter and collect them), all of the payloads were successfully recovered, ready to fly another day. 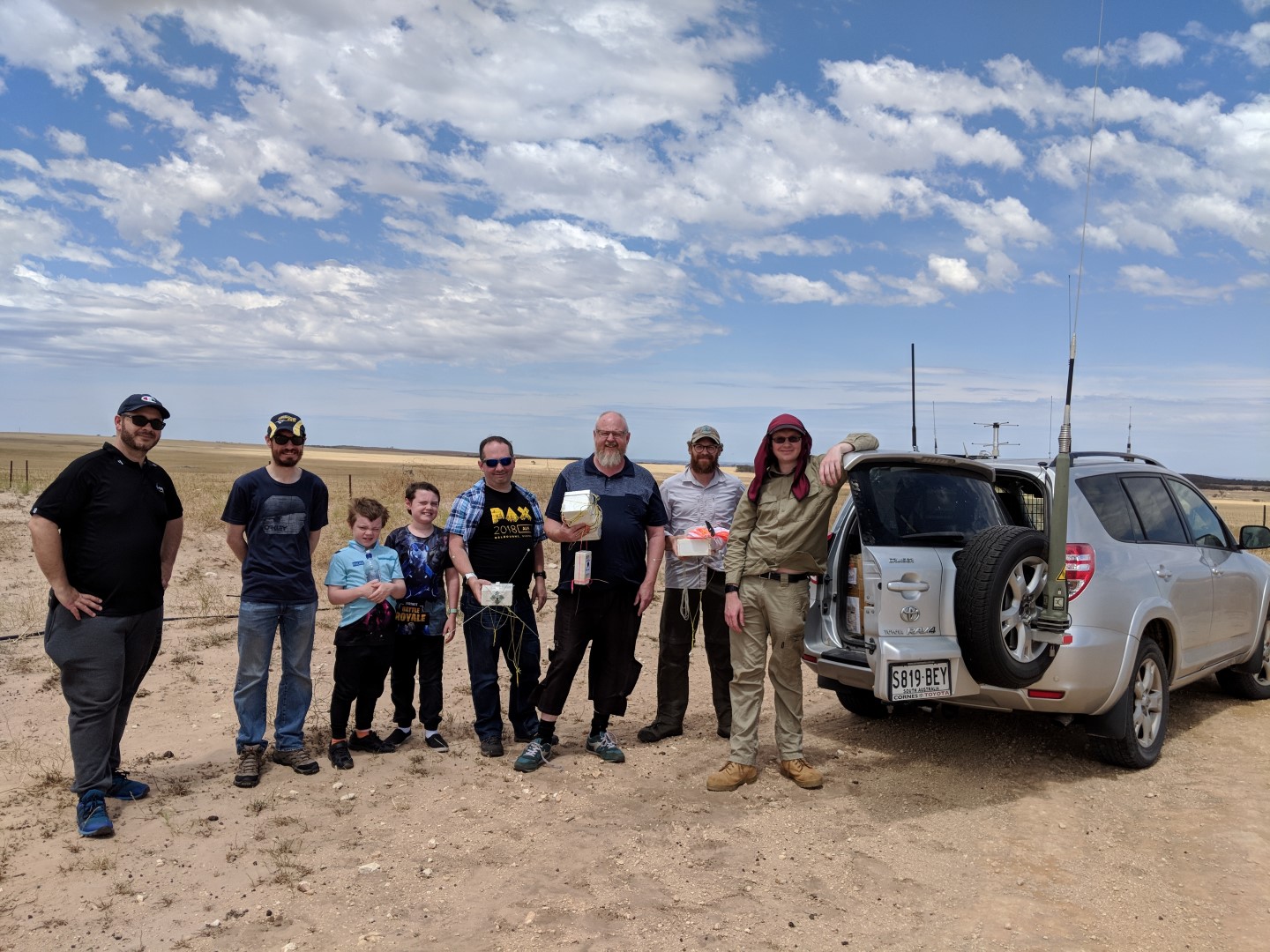 At the end of the day the team was very happy with the results. What was even better were the number of people who participated in the event, either on site or from home with tracking, SSTV, FM voice, or just tuning in on social media and following along via the Internet. It truly represents the aims of AREG in promoting experimentation in Amateur Radio to see all of the people who joined in. To each and everyone of you, thank you for your participating!

To the teams that built and flew the balloon, a special thank you to you as well. May there be many more!