Horus 57 was the first ‘large’ Project Horus high-altitude balloon launch in over a year, and was aimed at getting more stations involved in receiving the common telemetry and imagery systems used on our launches, and at the same time try and get some nice imagery of our state from the air!

The launch was originally scheduled for the 1st of May, but weather conditions resulted in the imagery launch being bumped a week, and a small telemetry launch taking its place. The telemetry-only flight was very well received, with 37 unique stations contributing telemetry, building anticipation for the full-scale launch, which was performed on Saturday the 7th of May at 10AM. 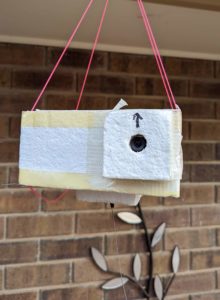 The main payload on this launch was a Wenet imagery payload. Wenet is an imagery downlink system first developed by David VK5DGR and Mark VK5QI in 2016, to enable high resolution imagery to be downlinked from a balloon launch. It uses Frequency Shift Keying (FSK) at 115kbit/s to send specially encoded JPEG images which can be reassembled from packets received by many spatially diverse receivers.  It’s also completely open source, so anyone can have a go at using it!

This particular Wenet payload was testing a camera lens made by ArduCam, in the hope of obtaining higher quality imagery. Unfortunately this lens de-focused as the temperature of the payload dropped during flight, resulting in many blurred images. We’ll be switching back to the tried-and-tested Raspberry PiCam v2 for future flights of this payload. The flight also included the usual complement of telemetry and flight management payloads. Primary telemetry was provided by a reprogrammed RS41, transmitting the ‘Horus Binary‘ 4FSK mode on 434.200 MHz. This was received by a large number of amateur stations running the ‘Horus-GUI’ demodulation software. Tracking of the payload was available on the SondeHub-Amateur tracker online, allowing global access to the position of the balloon throughout the flight.

The separate flight management payload was a LoRa-based payload operating in the 70cm amateur band. This payload allows remote termination of the flight if necessary (and it was very nearly used on this flight!). 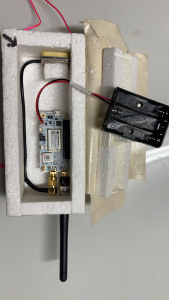 Also on this flight was an experimental LoRaWAN tracking payload built by Liam VK5LJG. The aim was to transmit position beacons into ‘The Things Network‘ (‘TTN’), which has gateways (receiver stations) in many locations across Australia. This payload previously flew on Horus 55.

The payload operated on the 915-928 MHz LIPD band, with a transmit power of ~50mW. The hardware was a RAK Wireless RAK5205 board, running custom firmware for the flight. Position updates were only sent every ~3 minutes to comply with TTN fair-usage guidelines.

Unfortunately this payload stopped being received approximately 30 minutes into the flight, due to a misconfiguration. We’ll try this again on another flight!

The launch crews arrived on-site at the Mt Barker High School oval around 9AM on the Saturday morning, and started preparations for launch. The entire preparation process through to launch was documented by AREG club member Iain VK5ZD:

This flight used a Hwoyee 1600g balloon, one of the largest balloon sizes we regularly use. Since the combined payload mass was relatively light (~600g), a relatively small amount of gas was required, resulting in the balloon being quite under-inflated, and prone to wind drag.

Immediately after launch, it was noted that the ascent rate was lower than the expected 5 m/s, a direct result of the increased drag on the under-inflated balloon.

Thanks to all that helped out at the launch site! It was great to see some new faces, and the many hands made the launch much easier. 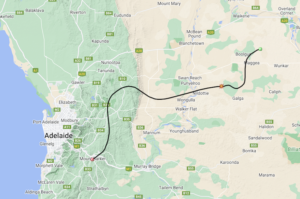 The original flight path prediction had the flight landing somewhere off the Stott highway, between Swan Reach and Loxton. However, the slower than expected ascent rate after launch meant the live flight-path predictions began to move further to the east.

The chase teams for the day consisted of Mark VK5QI and Will VK5AHV, and Gerard VK5ZQV.

The chase teams immediately headed off towards Swan Reach, and met up with some members of the Riverland Radio Club who had setup a receiving station for the imagery payload near the locality of Maggea. Peter VK5PE, Colin VK5CBM, Andy VK5LA, and Ivan VK5HS with his grandson Reece had decided to head out to setup near the predicted landing area and have a go at receiving imagery. This was their first time receiving the Wenet imagery payload, and so had brought along a lot of equipment to experiment with! There was also many other stations that had gone portable to receive the Wenet imagery. Peter VK5KX was setup near Sanderston with a WiMo X-Quad antenna and tracking rotator system, and Andrew VK5LA setup north of Swan Reach with a 15-element yagi. Andrew VK5CLD was also setup near Mt Barker summit with a homebrew 8-element yagi.

As the flight progressed, the reported altitude reached the expected 38000 m, and kept on rising! Unfortunately for the chase teams, at this altitude the balloon and payloads were heading east at 150 kph, and the predicted landing location with it, and so they had to get back on the road and continue onwards.

There was a tense period as the predicted landing location moved right across the Murray River, before finally moving further onwards to the east of Loxton. Around this time the flight continued on upwards, passing through 39000 m altitude, then finally 40000 m.

The ascent rate slowed down considerably above 40 km altitude, and there was a short time when the use of the cutdown payload was seriously considered to avoid the payloads ending up across the Victorian border. This ended up not being necessary though, as the balloon burst for a maximum reported altitude (based on the Wenet telemetry) of 40246 m! This is most likely the highest altitude ever reached by an amateur balloon launch in Australia! 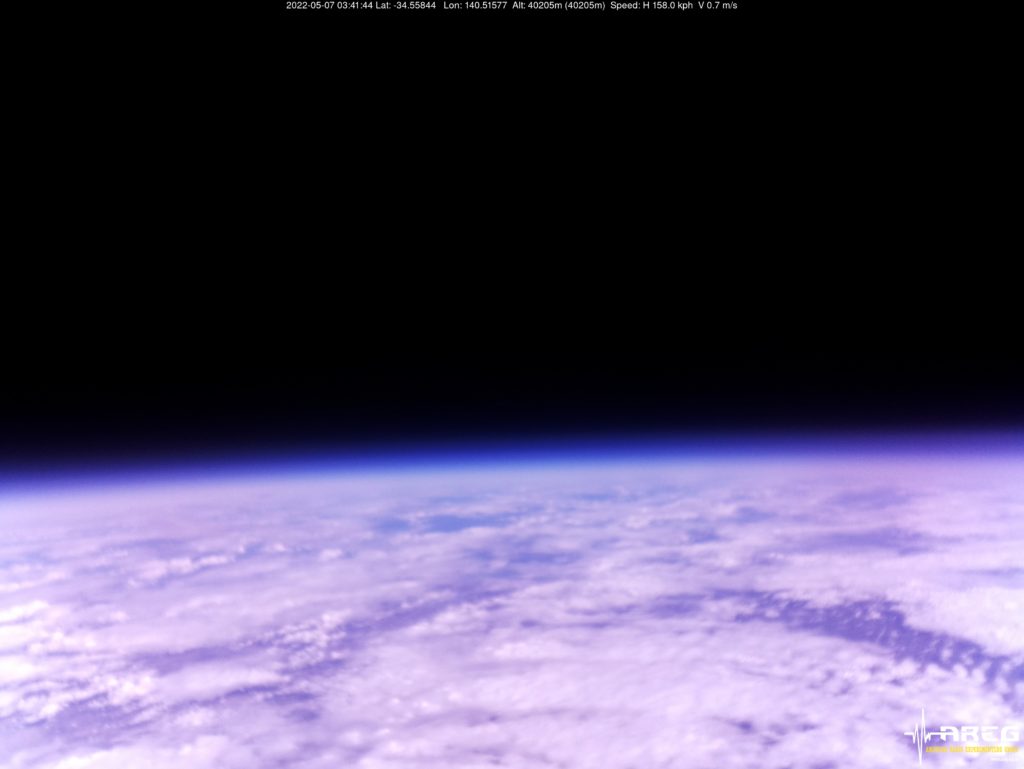 The payloads then began to plummet back to earth (a peak descent rate of 114 m/s was observed just after burst!) and ended up landing in a newly seeded paddock approximately 15 km to the north-east of Loxton. After obtaining permission from the landowner, the chase teams were able to carefully drive into the paddocks and recover the payloads. 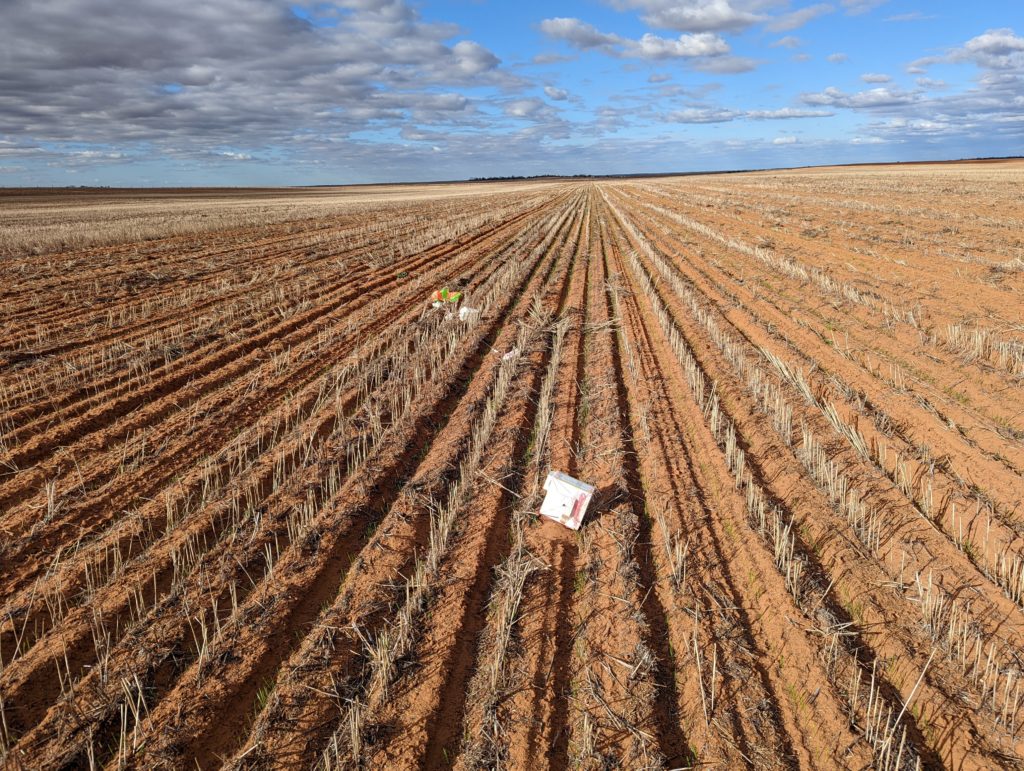 The Wenet imagery payload was still operating, and captured the recovery and walk back to the car: 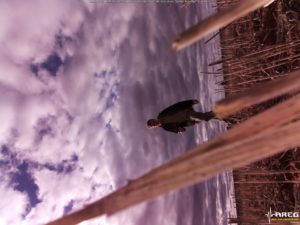 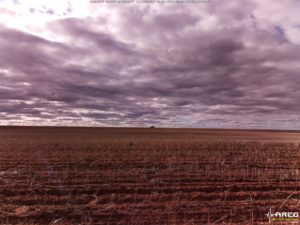 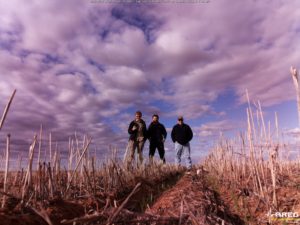 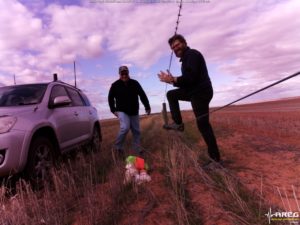 All the way through the flight, the Wenet payload continued to transmit live imagery to many receiving stations around the state. Unfortunately the new ArduCam lens shifted in focus due to the extreme cold temperatures experienced during the flight, resulting in most of the imagery above 3 km altitude being blurred. The lens appeared to recover around the peak of the flight, but then degraded again on descent before recovering after landing: 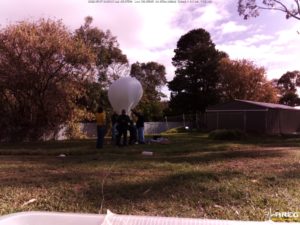 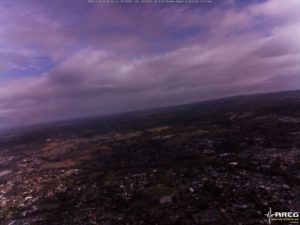 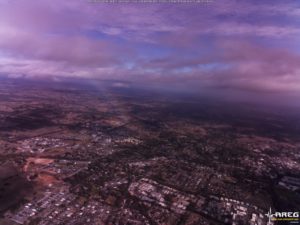 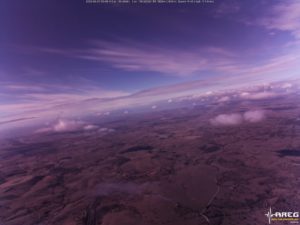 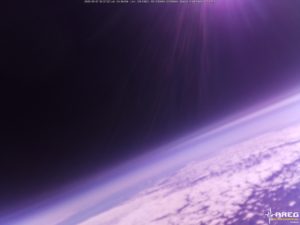 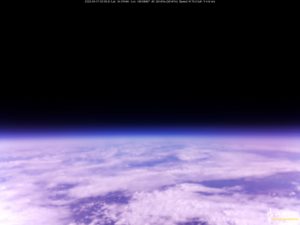 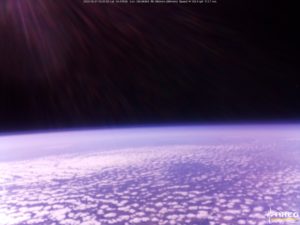 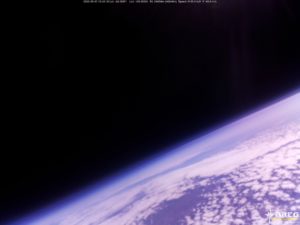 This flight saw the highest number of Wenet receiver stations ever, with 14 separate receiving stations contributing imagery packets. As a result, we had 100% image reception over the vast majority of the flight! This is a great result, and allows those watching from home to experience our high-altitude balloon launches in near real-time.

The following amount of data was contributed by each station: While most of the receiver stations were relatively close to the flight path, we also saw Ian VK5IS receiving from 160km away, and Tim VK3TNU receiving from over 300km distance! Tim was using a 9-element RFI yagi, paired with a RTLSDR and preamplifier, and has set the new record for Wenet reception distance!

The following plots show the percentage of each image that was received by each receiver station:

We also saw a huge number of Horus Binary receiving stations come online for this flight, with stations as far away as Melbourne contributing telemetry. A total of 41 unique callsigns were observed to upload telemetry throughout the flight, which is also a new record for a Project Horus launch!

A huge thanks to everyone that contributed to the flight tracking, and we hope to see you on the map on future launches!

Detailed statistics for each receiver are available in the table below:

Horus 56 and 57 made use of the new SondeHub-Amateur tracker website to enable anyone online to follow the flight’s progress. This is an extension to the SondeHub Radiosonde tracker, which allows tracking of meteorological radiosondes, and is developed by club members Michaela VK3FUR and Mark VK5QI, along with many other contributors.

The SondeHub-Amateur tracker in action during Horus 57.

The SondeHub project is supported by a grant from Amateur Radio Digital Communications, via the Amateur Radio Experimenters Group.

The next large Horus launch will likely be a re-flight of the DVB-S payload flown on Horus 55, with an improved payload antenna. This will likely need to wait until after winter, for clearer skies.

In the meantime, there are some initial plans for: