We are pleased to report that the high altitude balloon

flight of Horus 37 has been a success. The AREG Project Horus launch crew carried out the flight for Launchbox, a group which engages with the STEM programs (Science, Technology, Engineering, Math) in schools across the state.

Lift off was from Mt Barker High School at 10.00am, with landing occurring approximately 15km east of Mannum about 3 hours later.

8 payloads went aloft this flight. 5 from Launchbox and 3 from AREG. The new one for AREG was the experimental SSDV transmitter, which delivered live images from the balloon for a portion of the flight.

Launch was conducted under challenging conditions with squalls and wind gusts arriving about 20 minutes before liftoff. This caused considerable consternation from the launch team who were for a few minutes at risk of loosing or damaging the balloon before we had even gotten off the ground. However, through the skillful handling of the balloon by the AREG team, catastrophe was averted.

Once the balloon payload train was assembled, the countdown got underway. The weather eased and the flight finally got away safely.

Images from the Flight Ground Preparation and Launch

The flight itself went well, although it had to be terminated earlier than planned. The team did not want it landing in the River Murray. 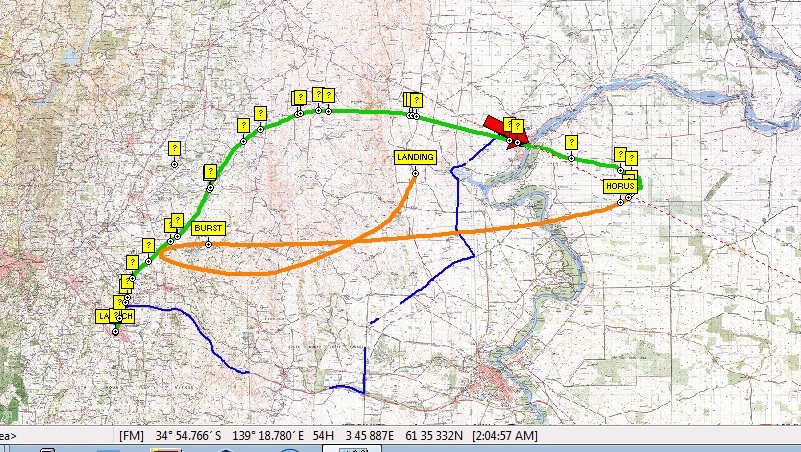 Flight Track from half way through the flight 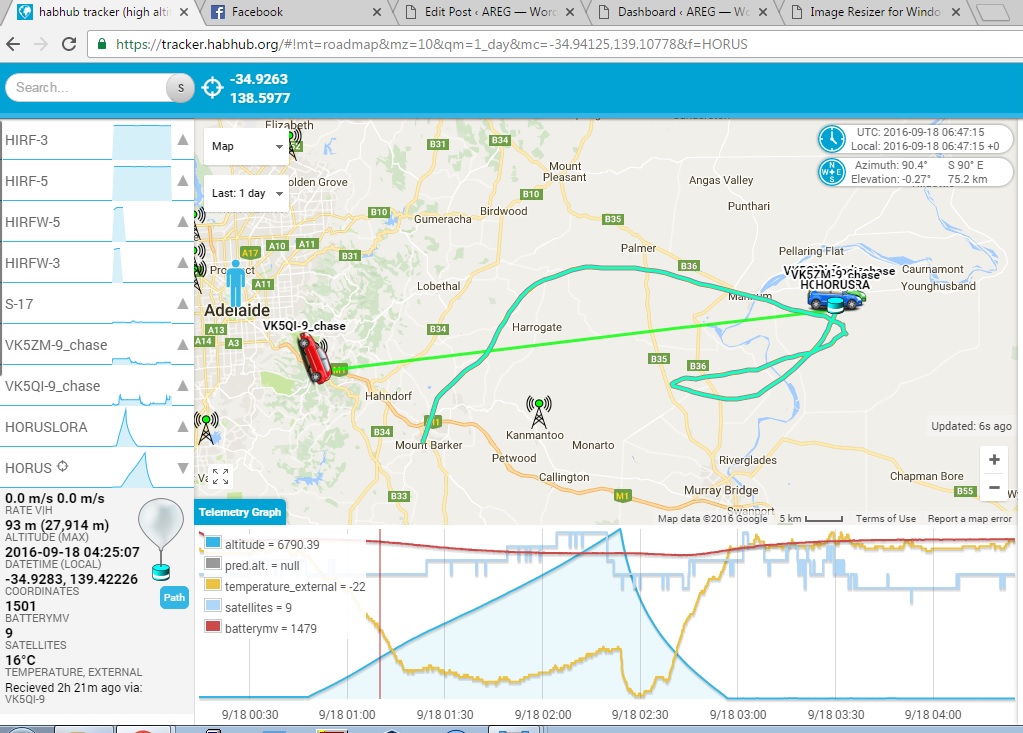 Lots of stations participated in the telemetry collection (thank you for your contribution).

As indicated above, this flight carried a first time payload for AREG. Mark VK5QI and David VK5DGR have been working on a slow scan digital image payload for the balloon system which alternates between 19.2kbit/s and 115kbit/s on a new downlink channel. This system makes uses of the UKHAS SSDV server to stitch together images from packets uploaded by multiple receivers. To help this along during this flight, Andrew VK5AKH and Scott VK5TST headed to the back of the Mt Lofty ranges after launch and collected as much of the SSDV picture feed they could for relay to the internet.

The SSDV capture software currently runs under Linux, with a screenshot of it running in a Virtual Machine on VK5QI’s CarPC below. The software is open source and can be found on GitHub. 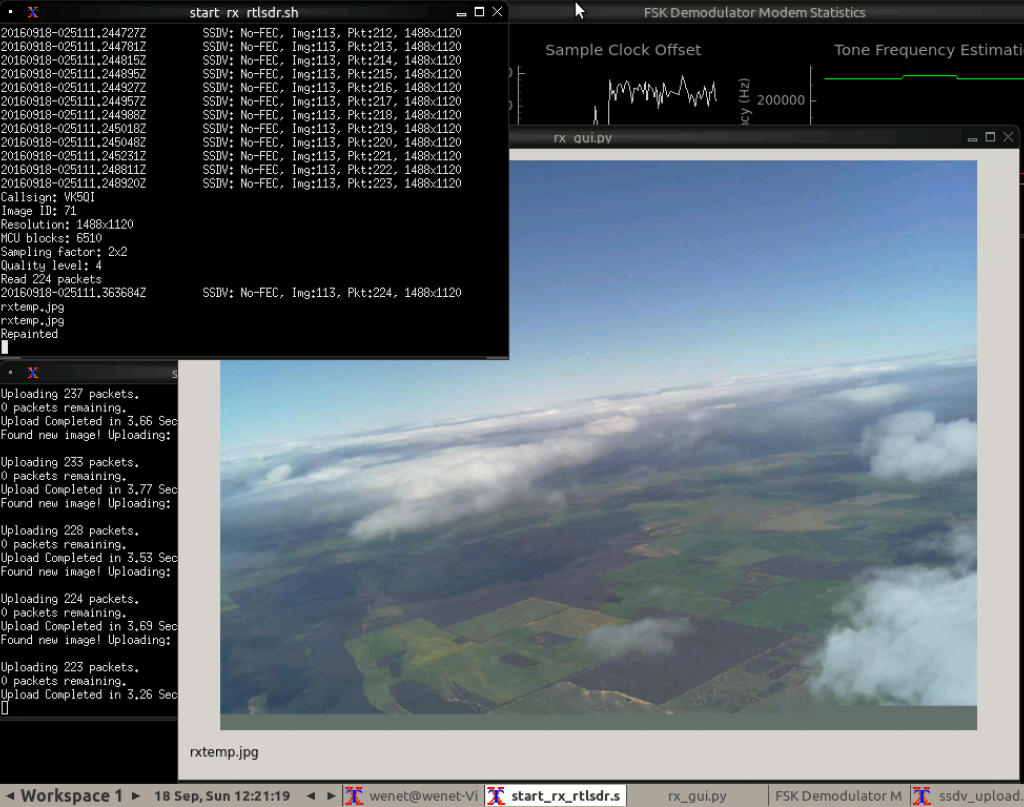 In this case, the modem software is still very much under development, without any FEC capability currently. David VK5DGR and Mark VK5QI are continuing to develop the system and you may see it fly again in the near future with some enhancements.

The following is the Gallery of the shots taken by the camera received on SSDV during the flight:

The following are some of the pictures downloaded from the camera after the flight:

At the end of the day, here was the crew that undertook the payload recoveries 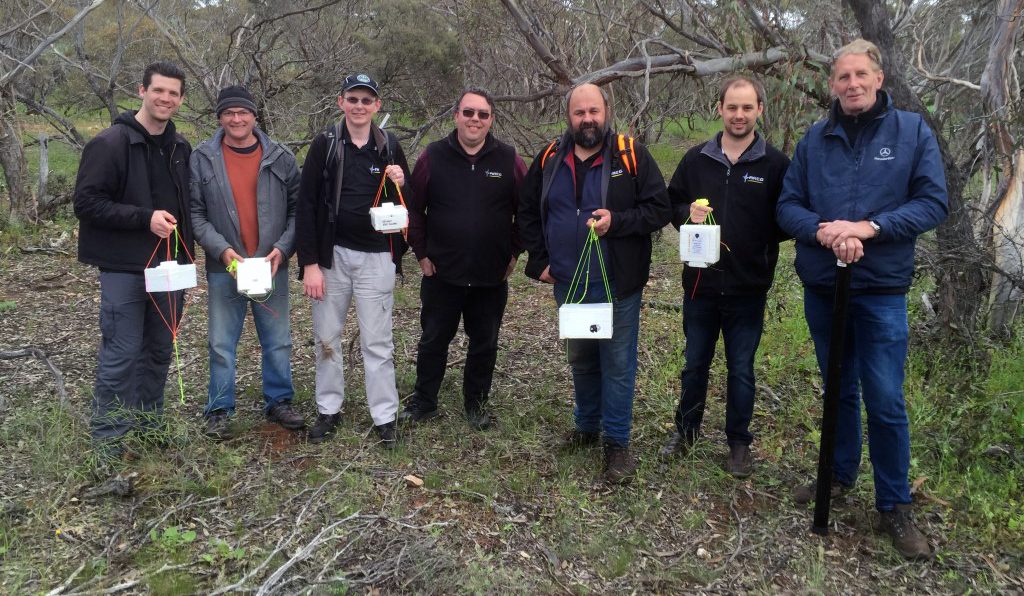 AREG would firstly again like to thank Launchbox for the opportunity to be part of the STEM program in schools. We also want to thank all of the team who came out today in somewhat cold and wet conditions to get the launch off the ground. The team included: Matt VK5ZM, Mark VK5QI, Grant VK5GR, Andrew VK5AKH, David VK5DGR, Scott VK5TST, Kim VK5FJ, Gary VK5FGRY, Josh VK5JO and Scott VK5TST.

Thanks also to the amateur ground stations who made the effort to receive telemetry and provide it to the tracking data pool online:

Without you these flights are that much more difficult!