AREG has been looking for many and varied opportunities to activate the VI5ANZAC callsign during our time allocation this week. Tuesday evening (28th April) saw a small group of us put the special event call on air with a QRP portable activation from Morialta Conservation Park.This was seen as a nice contrast to the QRO operation carried out over the weekend near Mannum (which was very successful with over 1000 contacts). 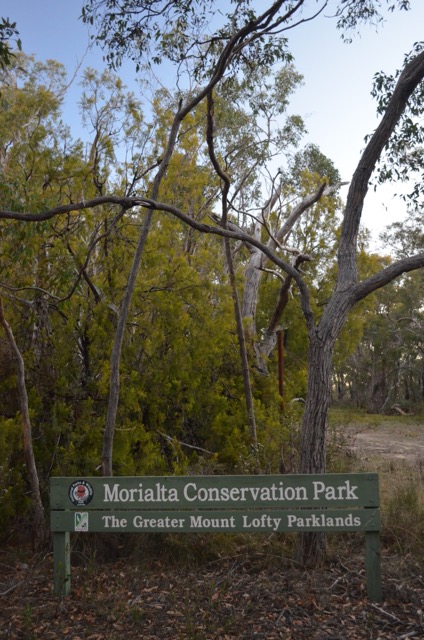 The QRP operation was lead by Bob VK5FO, Two HF stations were established plus a VHF/UHF operation later in the evening (taking advantage of the elevated position above the Adelaide metropolitan area). As the operation qualified for conservation park also being activated, Bob invited the founder of the VK5 Parks award, Paul VK5PAS to also attend and join in the fun.

Operation  was planned on 20m, 40m, 80m and 160m as well as 2m and 70cm FM. The only variable during the planning beyond our control was going to be the weather. Fortunately the weather gods smiled on us and it was a beautiful (if a bit cold) still evening.

On Tuesday afternoon, Bob VK5FO met Gary, VK5FGRY on site at around 17:00 local time and we started getting set up for the evening. A quick review of where to set up antenna’s and we got started. 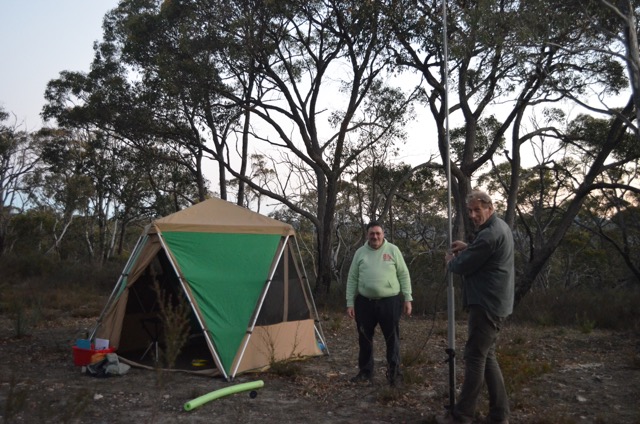 Paul VK5PAS arrived as we were setting up and assisted with the final details and we had the station ready to go and started calling at around and the first contact was logged at 08:49UTC. 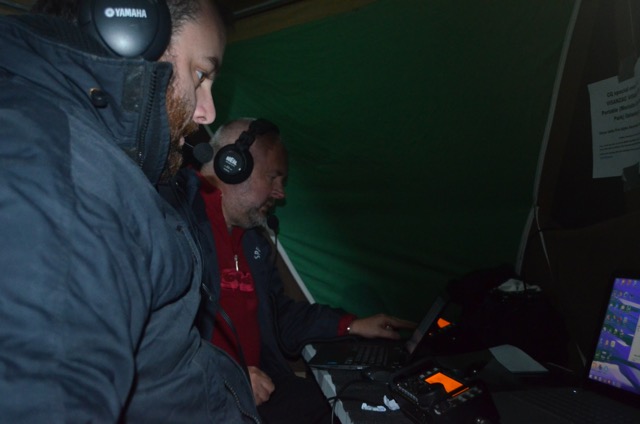 Andy (front) and Paul (back) operating the 2 stations

Just as we got underway, Andy, VK5AKH arrived, and Ray VK5RR arrived about 20 minutes later.The initial flurry on 40m was to be expected and we worked at a steady pace, rotating thru the operators on 40m for the next 90 minutes or so.   As the calls dried up on 40m we wound down the calling somewhat and 40m did in fact close out for all local contacts as well.  We could hear quite a bit of DX, but not work it.

The 2nd station started out on 20m and it was very slow – as feared, we had only just caught the tail end of 20m and had just a handful of contacts. 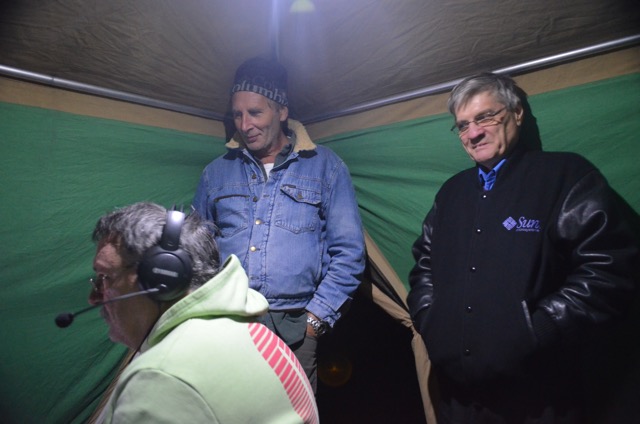 Given the conditions, we decided to move the 2nd station over to 80M earlier than we had initially planned and started calling there as well.  It was a slow and steady trickle of takers on 80m and we had an unusual request – could we try 160m!

Well, this was a bit of a challenge in itself as we were not at all prepared to have any sort of antenna on top band, but being challenged, we jury-rigged an EFHW as an extension onto the end of 1 of the 80M dipole elements, hit the tune button on the KX3 and managed to get it to tune! Two contacts was the result, one in Adelaide and one in Mt Gambier – worth the effort!

The 2 stations for this operation were both KX3 Transceivers  with a headset running 10 watts on SSB, each set up with a laptop for logging. 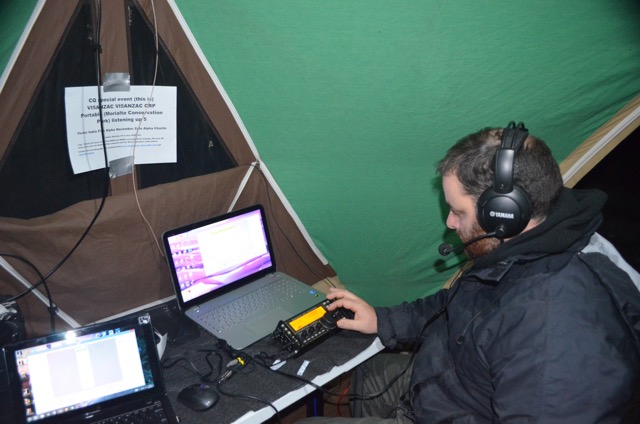 Grant, VK5GR was a very late arrival and his plan was to set up and see how many local contacts we could get on 2m and 70cm to add to the mix.After announcements on every repeater within ~100km a further 10 contacts were added to the logs on 146.55 and 439.025.

Once everything really slowed down, we decided to call it quits just on 21:30 local time (12:00 UTC) and started pulling the station down.  Within 30 minutes we had everything down and packed up, with the final task to check the logs and upload them.

The final tally for the Tuesday Evening QRP* activation  (QRP on HF) was as follows.

Operators for the evening

Without the awesome logistical support from Gary VK5FGRY we would not have been as comfortable in the heated tent!

A big thanks to all the chasers who make such an activation even more enjoyable, and yes, all of the logs will be uploaded to WWFF in the coming days as the HF operation was compliant with VKFF and from a recognized park.

Thanks To Paul for the photos from the Evening’s Event.

More details can be obtained from Bob VK5FO and Paul VK5PAS websites!