Thanks to Mark VK5QI, AREG is pleased to announce a new service has been added to the VK5RWN Repeater site. Mark has been developing a RadioSonde automated receive system which allows all of the Bureau of Meteorology weather balloon data to be collected and be made available on the internet. The data is available via the SondeHub instance of the HabHub High Altitude Balloon Habitat platform. You can access it here:

What can you see? Where all the active weather balloons are right now! 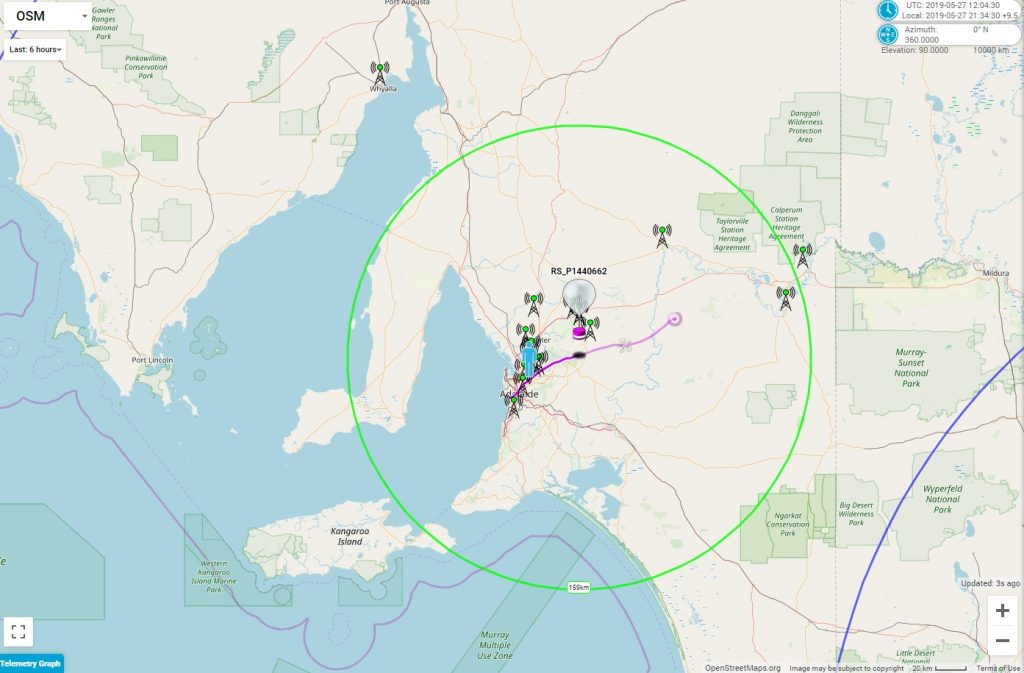 If you’re located in South Australia and are considering going out to recover a sonde, or have recovered one, please use the Facebook Group or the mailing list to announce your intentions! This helps avoid disappointment if others are intending to recover the same sonde.

Want to learn more? Read on…..

For quite a while now I’ve been interested in tracking and recovering radiosondes. These are meteorological instruments regularly launched by weather balloon from many locations around the world. Here in South Australia the Bureau of Meteorology launches them from Adelaide Airport twice daily (2315 and 1115Z), along with a few other locations around the state. 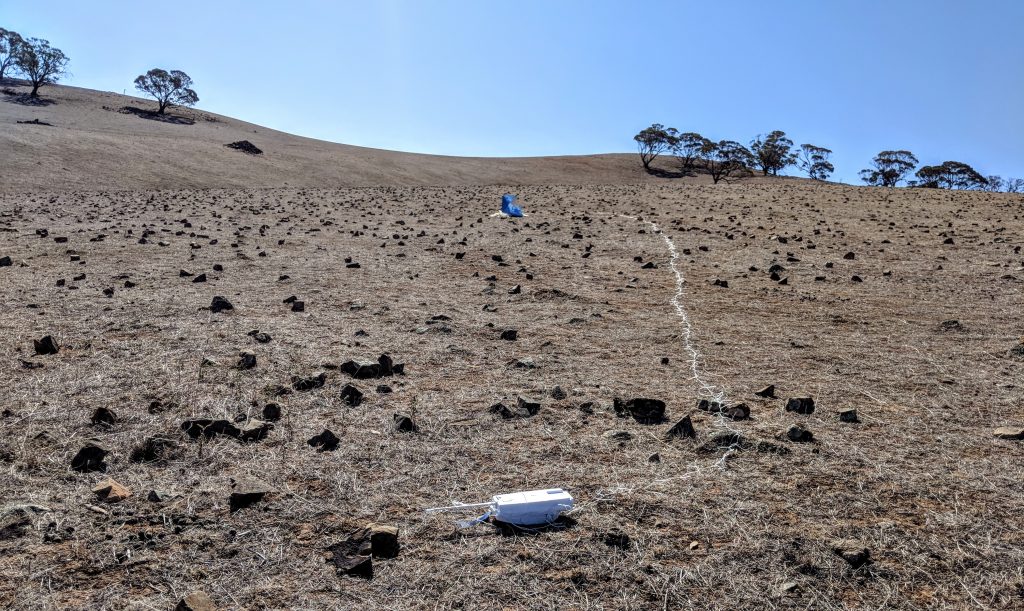 A Vaisala RS41 radiosonde found with the help of the radiosonde_auto_rx tracking network!

Radiosondes transmit in the 400-403 MHz band (usually on either 400.5/401.5/402.5 MHz), and there is a range of software, both closed and open source available to decode their telemetry. Not being entirely happy with the existing offerings, I started work on my own software, which became radiosonde_auto_rx (or ‘auto_rx’ for short).

auto_rx runs on a Raspberry Pi (or any other Linux machine) and automatically scans for and decodes radiosonde signals. Telemetry is uploaded to APRS-IS and the Habhub tracker for mapping purposes, and can also be viewed locally via a web interface. Most of the common radiosonde models are supported, including the Vaisala RS41 which is launched here in Adelaide. There are currently 147 auto_rx stations in operation worldwide (16 here in VK5), and so far (as of 2019-05-25 10Z) 19415 individual radiosondes have been logged.

So why do I bother doing this? Many radiosondes are (in part..) highly recyclable! The Vaisala RS41 contains a good quality GPS receiver, a micro-controller, and a radio transmitter – perfect for re-programming for use as a high-altitude balloon payload, as we have been doing on many recent Project Horus flights. In fact, the RS41 is the ‘reference platform’ for the new high-performance balloon telemetry system developed by David Rowe and I.

Chasing and recovering radiosondes is also great practice for Project Horus launches, with a few of the new Horus regulars starting out tracking radiosondes, and many others around VK5 regularly out chasing the BOM’s radiosonde launches. We use the same mapping software for both radiosonde and Horus chases.

To help improve tracking coverage, I proposed to install an auto_rx receiver station at one of AREG’s premier repeater sites, overlooking the Adelaide plains. Thanks to the generosity of AREG members in approving this proposal, the receiver was installed over the easter break. A big thanks to Ben VK5BB for assistance in fabricating an antenna bracket, and helping with the installation! 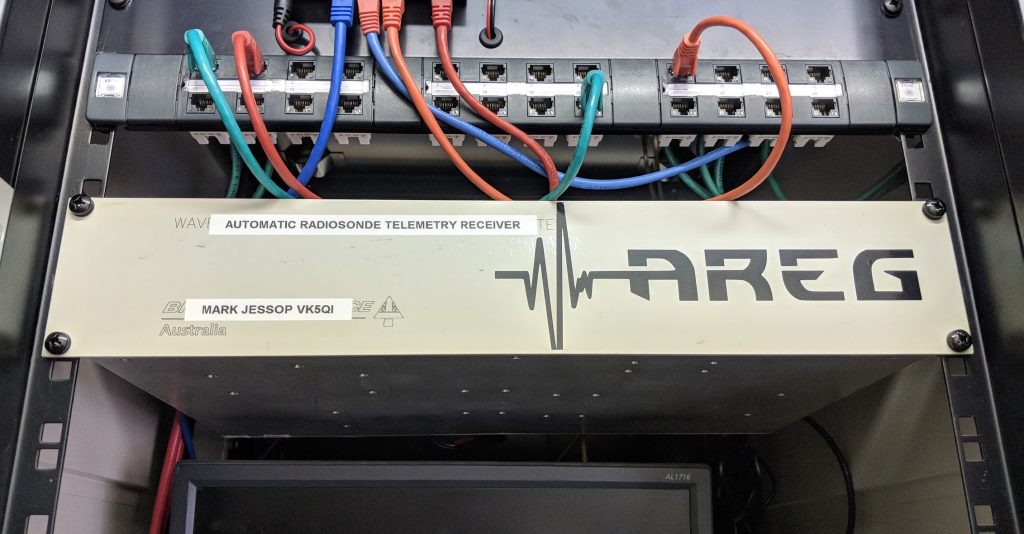 The auto_rx receiver station installed in a rack at the site.

The auto_rx receiver hardware consists of a Raspberry Pi 3, with two RTLSDR v3 dongles attached, allowing simultaneous reception of 2 sondes. The incoming RF from the antenna is filtered through an interdigital filter (passband 400-403 MHz, stop-band attenuation > 90 dB) before being going through a preamplifier and splitter to the two dongles. The estimated system noise figure is about 5dB, mostly from the insertion loss of the filter. Given this is a very RF-noisy site (co-located DSTAR repeaters, and many commercial services on a tower a few hundred metres away), the higher noise figure is an acceptable tradeoff – without the filter the receivers would immediately overload!

All the equipment is mounted within a 2RU rack-mount chassis, with all power and network inputs heavily filtered to avoid coupling in unwanted RF. The total power draw of the unit is ~10W. 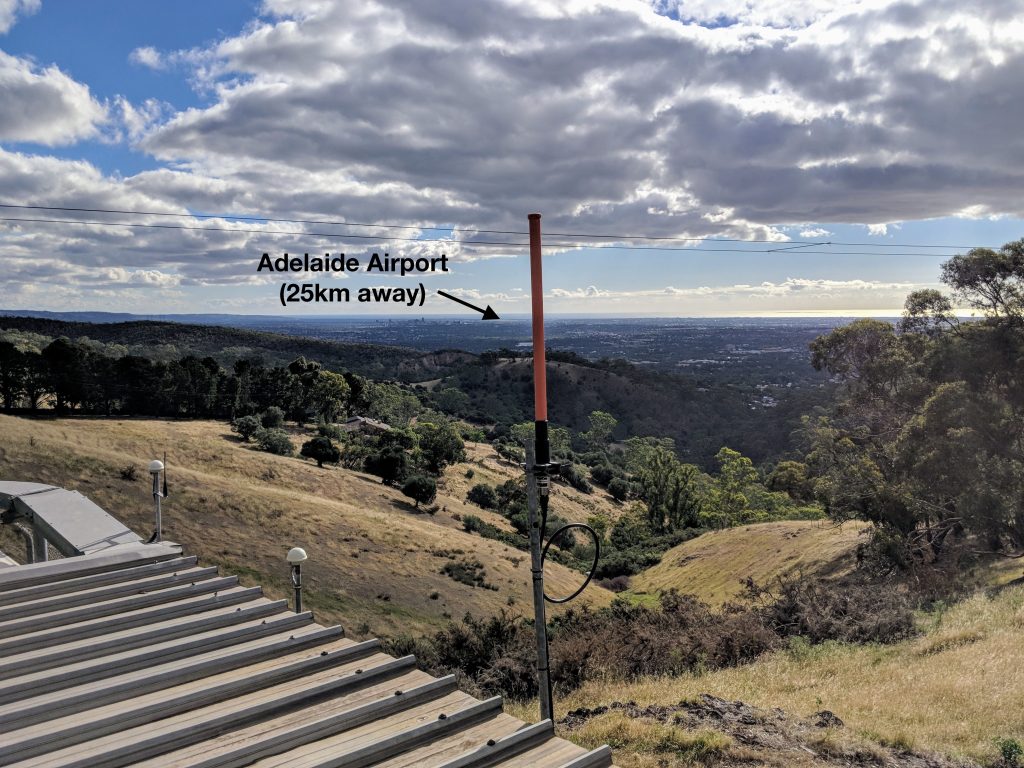 View from the antenna!

The antenna is an AEA co-linear (kindly donated to the project by Ivan VK5HS) mounted to the side of the repeater hut. Being ~450m above sea level, the antenna has direct line-of-sight to the Adelaide airport, and essentially anywhere to the west of Adelaide.

Receiving a radiosonde on the ground at Adelaide Airport

With such excellent line-of-sight, the station regularly receives signals from the Adelaide Airport radiosondes before they launch, and often even during the ground-test and calibration activities performed on the radiosonde within the Bureau of Meteorology building at the airport.

Also often visible are radiosonde launches from the Ceduna and Woomera receiving stations, which typically rise above the horizon when they reach ~10km altitude. Coverage to the east is not quite as good, being blocked by the Adelaide Hills, however radiosondes are regularly tracked down to ~1 degree elevation.

Thanks again to all those who helped make this possible!