This year AREG was once again involved with the International Space University’s Southern Hemisphere Space Studies Program (SHSSP), hosted by the University of South Australia. As with previous years, AREG performed a high-altitude balloon launch, carrying a SHSSP-developed payload. AREG members also worked with the project participants, running tutorials on various aspects of the launch.

The planned launch date was the 2nd of February, but had to be delayed a week due to poor flight-path predictions. In the lead-up to the new launch date (9th of February) predictions were looking good, however as the date got closer the prediction moved further and further north with a predicted landing to the west of Morgan. To make things even more interesting, the chance of showers at the launch site increased from 10%, to 30%, then to 70% over the final 3 days before the launch, along with predictions of 30kph winds.

Still, launch planning continued, and on the morning of Saturday the 9th of February the Project Horus launch crew and the SHSSP participants assembled at the Mt Barker High School oval for one of our most challenging launches to date! 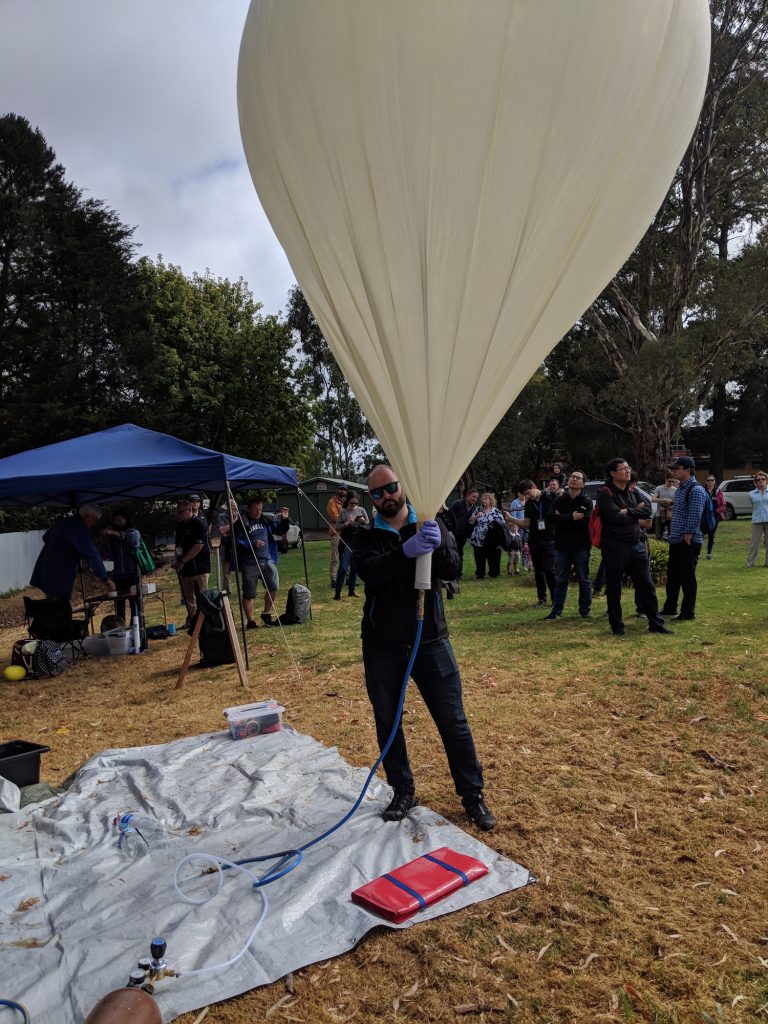 After finding a filling location mostly out of the wind, the launch crew were able to get the balloon filled quickly and get the payloads laid out ready for launch. SHSSP participants assembled and tested their payload, before sealing it up ready for the launch.

Just as the planned launch time of 11AM approached, the launch director was informed by Air Traffic Control that a 10 minute launch hold was required. This couldn’t have come at a worse time, as the wind started to immediately pick up. The balloon wranglers had a very challenging time stopping the balloon from blowing around in the wind, with the latex envelope coming dangerously close to bursting many times.

Finally the launch was given the all-clear from ATC, and the payloads were released during in a short lull in the wind, using the classic ‘running launch’ method. Unlike a previous launch in high winds, the payloads easily cleared the trees and were on their way to the stratosphere.

A big thanks to all the launch crew for helping out – it was great to see many members at the launch site, and it certainly made this challenging launch a lot easier!

The chase teams for this flight consisted of Mark’s team (Mark VK5QI, Andy VK5AKH and Will VK5AHV), and Liam VK5LJG flying solo. As the flight path was predicted to be a long one (landing near Morgan!), the teams set of immediately after launch, leaving pack-up to the rest of the ground crew (thanks guys!).

Meanwhile tracking stations across the state began collecting telemetry. Michael VK5ZEA in Port Lincoln had his station in full swing: 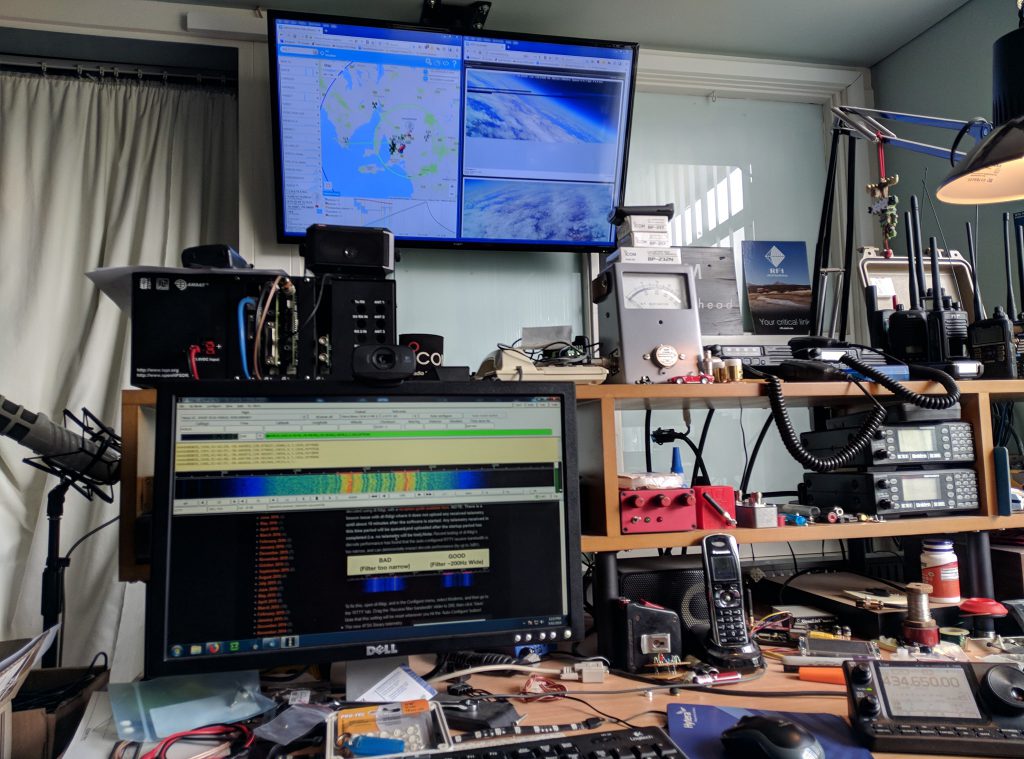 While the AREG ground station deployed and manned by Peter VK5KX collected as much of the telemetry as possible from the multiple transmitters on this flight.

As for the chase and recovery teams, they steadily drove north through Palmer and Sedan heading for an expected landing near Morgan. The teams were caught by surprise by the balloon’s early burst at 25km altitude (the expected burst was 35km), which shifted the resulting landing prediction very close to the River Murray north-west of Waikerie.

Mark’s team immediately diverted through Blanchetown and headed towards landing area, and were able to track the payloads down to 62m altitude from the highway. A route to the landing site (in a vineyard at Qualco) was determined, and the team continued on. Unfortunately Liam VK5LJG had a vehicle fault, and had to stop at the Blanchetown roadhouse to await repairs.

While Mark’s team was approaching Waikerie, Steve VK5ST also made an appearance – he had been waiting near Morgan for the balloon to land, and had made his way to the landing area. After a brief discussion with the Vineyard manager the teams were able to drive right to the payloads, which had landed across four rows of ripe grapevines. 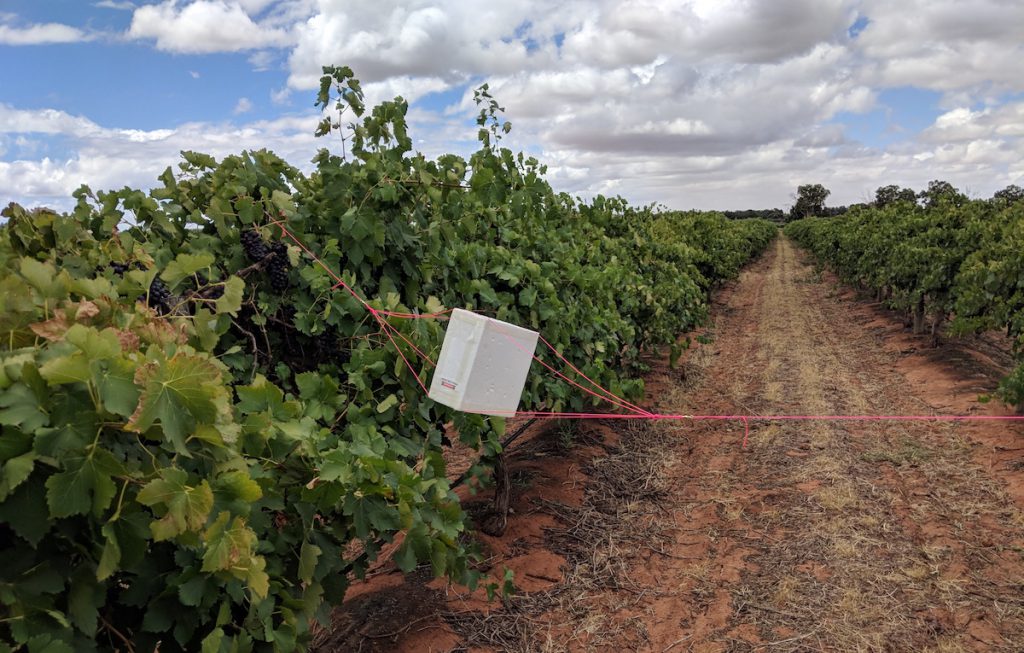 The SHSSP payload, suspended between grapevines.

Mark’s team then headed on to Waikerie for a much needed Bakery visit!

As usual, we had a good showing of Amateur Radio operators from around the state receiving telemetry from the balloon. It was good to see a few new callsigns tracking telemetry (Hi Liam!) as well as our regulars. 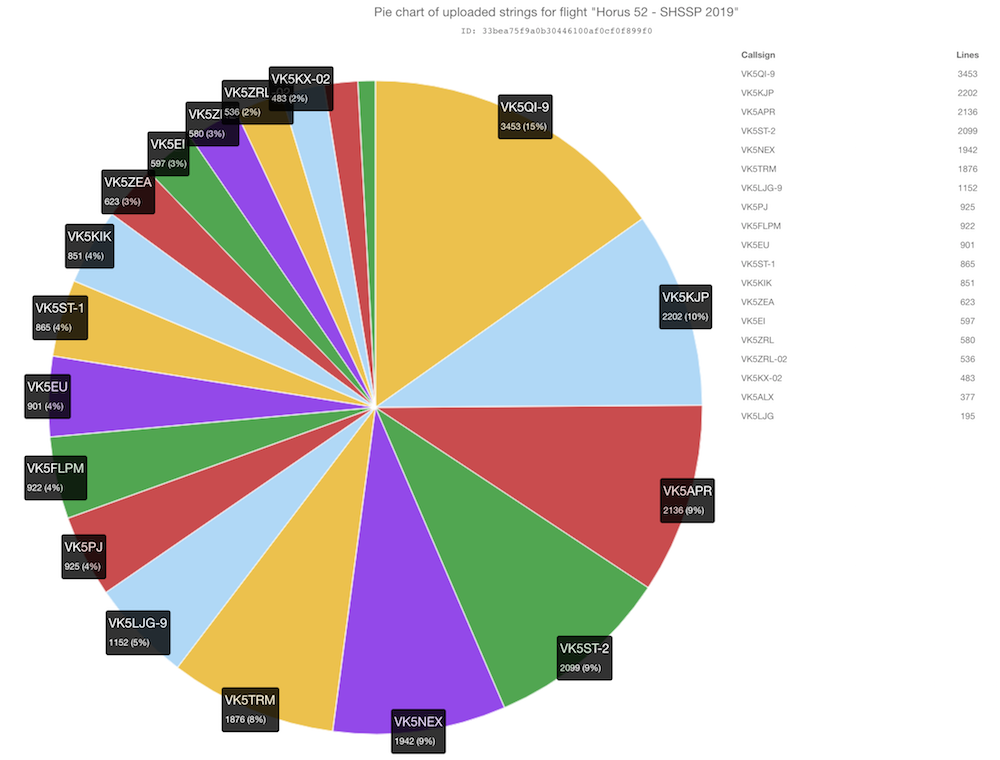 The flight had the usual RTTY and 4FSK payloads, the telemetry statistics of which are shown below:

Thanks to all who participated!

This flight featured two Wenet imagery payloads – one with a downward-facing camera, and one outward-facing (for nice horizon photos). For the most part, these were identical to the Wenet payloads flown in previous Horus launches. The downward-facing payload was also configured to to receive telemetry from a SHSSP-designed payload and relay it to the ground via the Wenet FSK downlink.

Even though it was quite cloudy, the two payloads were able to capture excellent imagery throughout the flight.

Thanks to the following receiving stations who contributed to the Wenet reception effort: 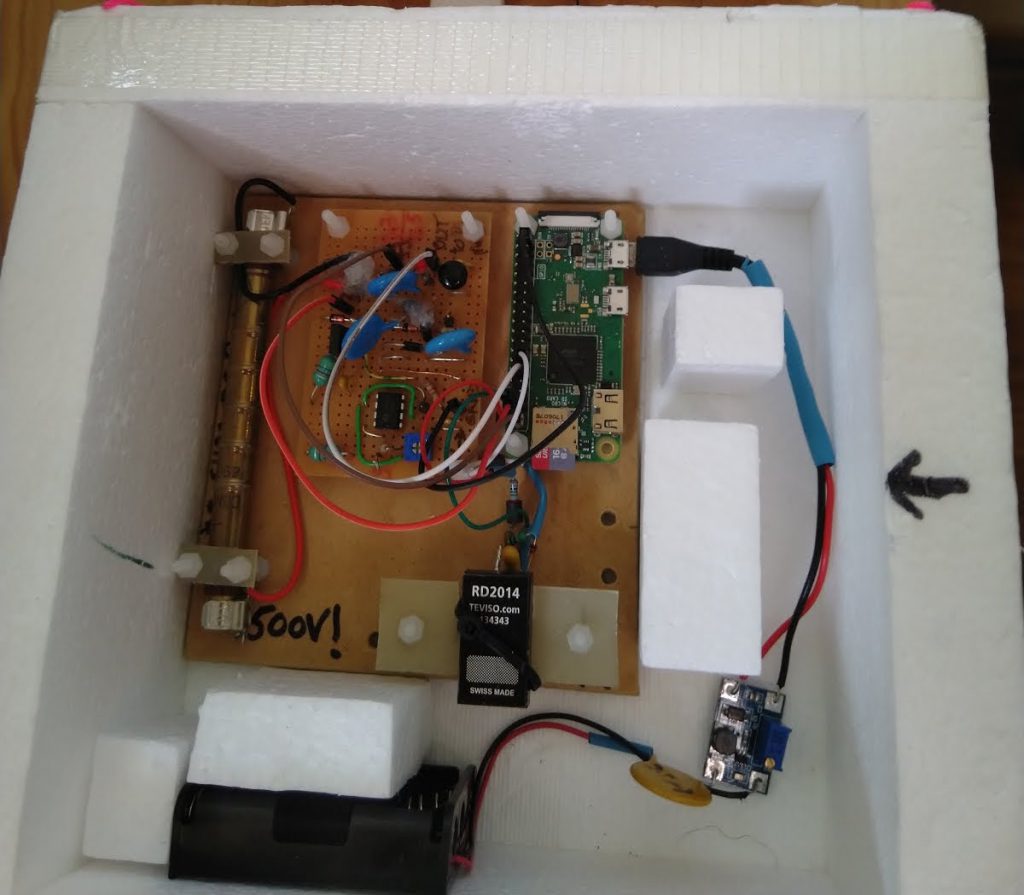 Two radiation sensor types were used: a geiger-muller tube, and a PIN-diode-based sensor. Radiation detection events were logged by a Raspberry Pi Zero W, and relayed to the downward-facing Wenet payload for transmission to the ground throughout the flight.

From the flight data, Bill Cowley (VK5DSP) was able to create plots of radiation count vs altitude: 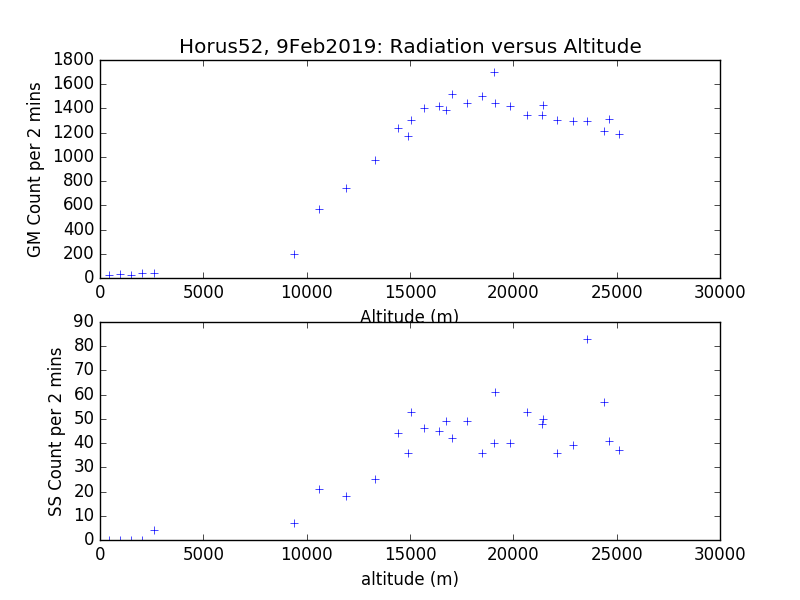 These plots show the ‘Regener-Pfotzer Maximum’ at ~18km altitude the characteristic peak in the distribution of charged particles in the atmosphere. Above this point the radiation intensity drops due to there being less atmosphere for cosmic ray interactions to occur; below it, the intensity drops due to secondary particles being blocked by denser atmosphere.  A full writeup of the payload and results are over on Bill Cowley’s blog.

With the usual excellent imagery from the Wenet payloads, and the good data from the SHSSP payload, this flight can definitely be considered a success – even with the early burst. Thanks again to all who participated, and we look forward to more Project Horus flights in the future!