On Sunday the 8th July, the Tea Tree Gully Library’s echidna mascot, Anstey, rose into the sky to an altitude of 36,374 metres under a High-Altitude Balloon. This was Anstey’s second flight into the stratosphere, and Project Horus’s 49th balloon launch.

Originally planned for the 30th of June, Horus 49 had to be delayed a week due to very poor weather conditions. Even still, this flight was a a long one for the chase teams! Fortunately we had the assistance of a team from the Riverland Radio Club who mobilized from their home base (much closer to the LZ) and who then played a big part in tracking and retrieving Anstey at the end of his flight. You can read about their adventure on the RRC Blog.

As usual, the launch was from the Mt Barker High School oval – thanks must go to the school for allow us to use their oval for so many launches! A good number of AREG club members came along to help out with the launch. Also present at the launch were members of Anstey’s Space Club, there to watch the launch and see Anstey off into the stratosphere! 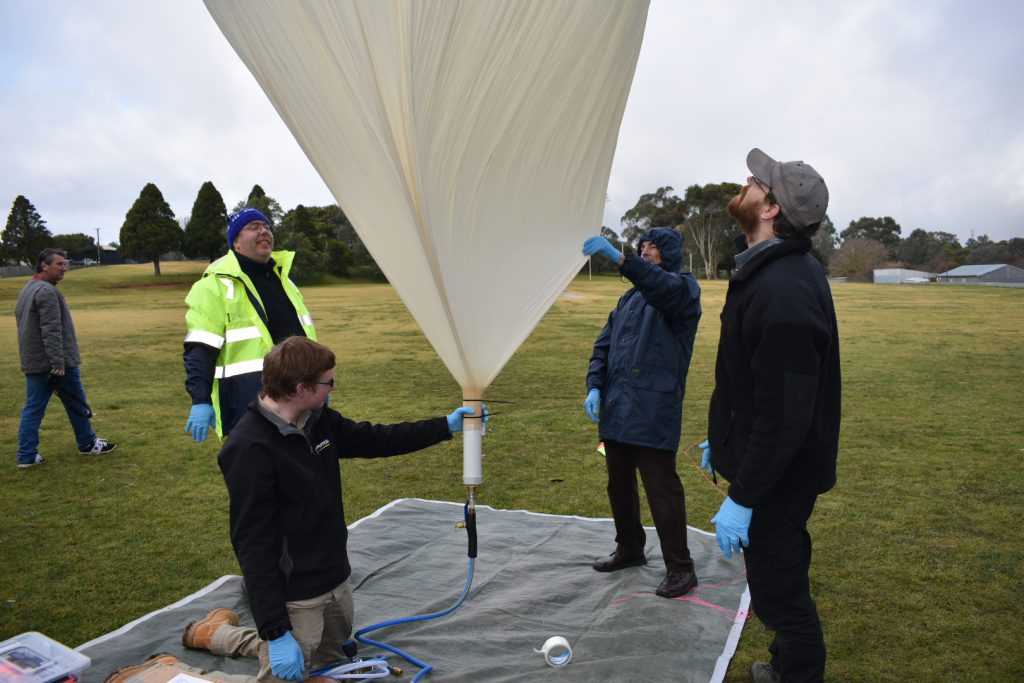 Payloads were laid out, turned on and tested, and the balloon was filled with somewhat more gas than usual. The flight path predictions had a possible risk of landing close to Loxton, so additional gas was used to give a higher ascent rate (as it turned out, a *very* high ascent rate). Wind gusts made filling the balloon a bit of a challenge, but there were no lack of hands to help keep things from getting out of control.

At just after 10AM, the wind died down and we had a perfect launch! 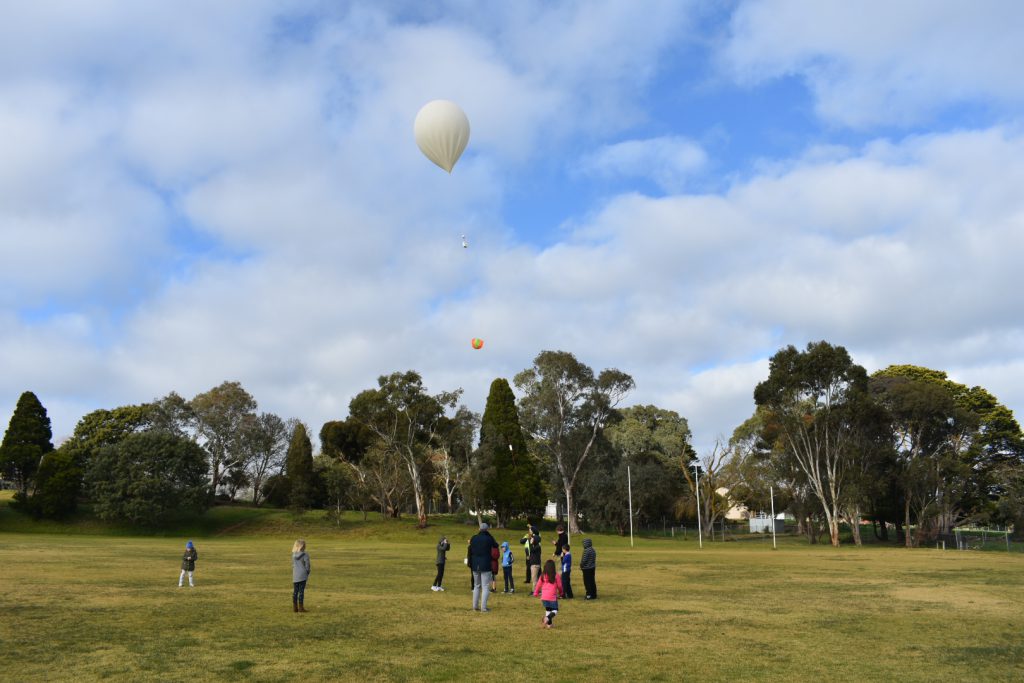 On board Anstey had two cameras recording things. The first was a GoPro miniature video camera! The second was a still camera that was sending photos live to ground as the flight progressed.

Right after the launch, Mark VK5QI and Will VK5AHV quickly headed off towards the expected landing area to the South-West of Loxton – a long drive away! Marcus VK5WTF and partner were also following not far behind.

The ascent rate ended up being much higher than intended – ascent rates as high as 9m/s were observed at some points in the flight, resulting in a shorter than expected flight. Even still, the Hwoyee 1600g balloon used made it to a very respectable 36374 metres altitude before bursting.

With the original flight path prediction due to land near Loxton, it was looking pretty unlikely that the chase teams departing from Mt Barker would make it there before landing. Luckily, a group of Riverland Radio Club members were on the case! Ivan VK5HS, Peter VK5PE, Danny VK5DW and Andy VK5LA also headed out to chase, starting from the Loxton area. Rob VK5TRM was also out for the chase. Ivan & co had been practicing by hunting the Bureau of Meteorology radiosondes, so were well experienced in chasing balloons – so much so that they were able to get into position to watch the balloon land in an area of scrubland near the locality of Mantung (40km SW of Loxton).

Mark and Will were not far behind, arriving at the landing site a few minutes later. A short walk later and Anstey was sighted… about 8 metres up a gum tree!

With some persuasion from a SpiderBeam pole, Anstey was recovered. Many thanks to all those who came along for the chase! 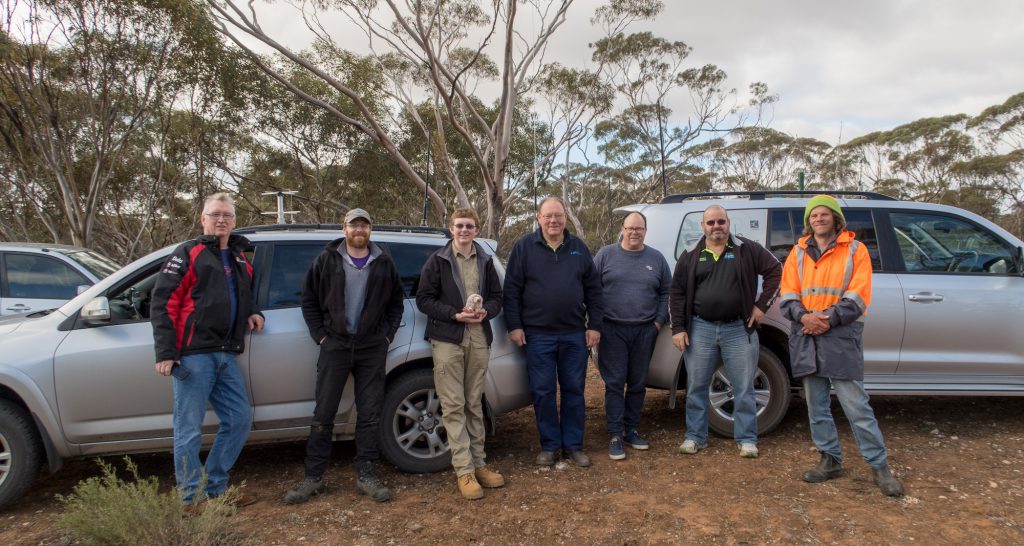 Throughout the flight Anstey was imaged via a version of Project Horus’s ‘Wenet’ imagery payload, which transmits images down to the ground via a 115kbps 70cm transmitter. As expected the images of Anstey were amazing, and were viewable live via HabHub’s SSDV webpage.

This live imagery is only possible through volunteers running ground-stations. Thanks go to VK5APR, VK5EU, and VK5KX who ran stationary receivers. Mark VK5QI was also running a mobile Wenet receiver in his chase car.

As with all previous Project Hours flights, a RTTY payload was flown. Many listeners contributed to tracking this payload:

New to this flight was an experimental ‘Horus Binary’ payload, which was transmitting a MFSK telemetry mode developed by David Rowe VK5DGR and Mark Jessop VK5QI. This new mode has significant performance advantages over RTTY, and will hopefully become the new default telemetry system for Project Horus flights. David VK5DGR also has an overview of the payload and how it performed on the flight on his blog. Many stations were able to run the new decoding software and track the flight using this mode:

The new mode provides position updates twice as fast as the 100 baud RTTY payload, and with 6dB better decoding performance (meaning double the range!). The update rate may have been too fast it seems – while about 2600 packets were transmitted during the flight (confirmed as received on VK5QI’s mobile station), only ~1800 of these made it into the Habitat tracking database! This is likely a result of upload timeouts – some changes will be made to the software prior to the next Horus Binary flight so this issue can be further debugged. Still, the new mode performed incredibly well in the chase cars, providing  rapid and regular updates to the chase car mapping systems.

Thanks again to all who helped track the flight using both Wenet, RTTY, and the new modem. Expect the Horus Binary mode to make appearances on more flights in the future!

To give more listeners an opportunity to decode the new Horus Binary mode (and to use up some leftover gas from Horus 49!), a small balloon launch will take place sometime in Late July. This will be a ‘small’ balloon launch (as per the CASR Part 101.E definition), flying a re-purposed RS41 radiosonde clocking in at just over 40 grams. A new version of the Horus Binary decoder will be released prior to this launch to allow better analysis of the upload issue encountered on Horus 49.

Also coming up is the 20th anniversary of AREG – as part of the celebrations, we will be performing Project Horus’s 50th launch! On this flight we expect to fly:

.. along with the usual telemetry and cutdown payloads. Stay tuned!