Back in mid August 2017, the tower supporting the antennas for the VK5RWN D-Star repeater system was damaged during the big blow that accompanied the storms. The tower, which was a 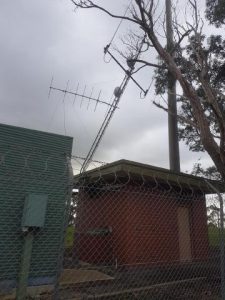 section of a Hills Telemast bolted at the roof line of the communications hut, has been in service for about 27 years and was in good order. It appears that the wind loading had been exceeded during the August storms and the tower was bent just above the roof line of the building and the top section with the antennas was approximately 30 degrees off the vertical.

Well, no option, it had to be replaced!

The working bee at the VK5RWN site was scheduled for Tuesday 19 December 2017.

Ben VK5BB was at the site around 0845 hrs local time and the other members of the work crew arrived shortly afterwards. 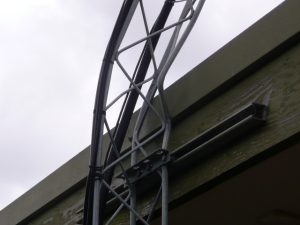 Apart from initial preparations, and the OH&S site survey, the first job of the day was to erect the scaffolding, on the roof of the building! Gave us very easy access to all antennas for disassembly. The scaffolding was also used for the reassembly, thereby minimising the need to actually climb the tower, though Colin VK5ACE later did, to re-mount the 2m antenna at the top. 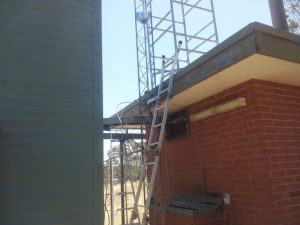 bend in the tower (just above the roof line) and the tower easily removed. The coaxes were laid out to one side so as not to be damaged and ready for re-installation. 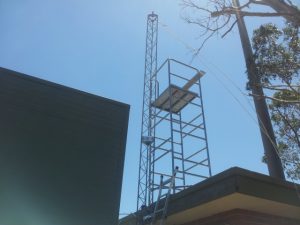 The top end of the new tower was lifted (man-handled with ropes) above the adjacent hut and then the base lifted into position near where it was to be mounted. Using the ropes, the tower was then pulled upright, across the gap between the two buildings to its mounting position, loosely bolted in place whilst we marked out where the base bolts were to go, drilled and fitted the Dyna bolts and the tower was firmly bolted in place. Actually went in place quite well with a minimum of jiggling etc!

After lunch, the antenna cross arm and antennas were refitted, thanks to Colin VK5ACE, the main 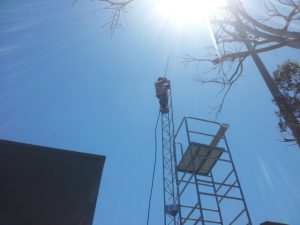 climber/rigger for the day. As the Wi-Fi dishes were refitted, the day started to get a bit blowy but the dishes were pointed approximately in the right directions. The 2m 7 element Yagi for the Broadcast Source transmitter was re-installed as a 3 element Yagi and pointed at Crafers. All coaxes were resealed, dressed and cable tied to the tower.

All antennas are back in their old positions, determined by the lengths of the various coax feeds. The tower, now 9m high, carries a 2m, a 70cm and a 23cm vertical “white stick” collinears, two 200mm Wi-Fi dishes and a 3 element 2m vertical Yagi. 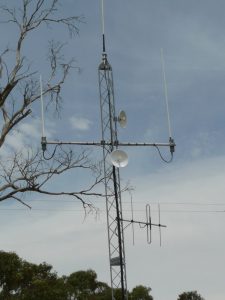 All equipment was turned on again and the various systems tested, we even had the Internet back on at the site, so we did get the dish right, either that or it has strong side lobes. (The Internet connection was previously still working even though the dish was pointed at the sky? A relay from the ISS??)

The D-Star operations were checked at the site and later again from Ben’s QTH and all was good, including remote access to both the D-Star and the Broadcast computers.

Many thanks to the crew who helped during the day and especially Olga VK5FOLG, as she supplied a fresh cut lunch for all and delivered on site about 10 minutes before the lunch break.

Reports from the D-STAR users have reported a significant improvement of signal strengths at Balaclava and Mt Barker on 2m and from Hallet Cove on 70cm, so all appears to be good again.

Next task for the VK5RWN D-STAR system is the upgrade of the computer to a new 64bit system running CentOS 7 64 bit and the new G3 gateway software. This is scheduled for early in 2018.