payloads only for AREG and the Project Horus group. It also marked the welcome return of Terry VK5VZI to the project (who had been travelling for work for some time), who brought many new faces to the event. It was fantastic to see new people taking an interest in Project Horus.

However, as always it seems when we try these flights for ourselves, Murphy seems to come out to play, ensuring things dont quite go to plan…..

The payloads for this flight were planned to be the standard 100 baud RTTY beacon, the SSDV live imaging payload (with improved modem software), several GoPro cameras (we had one pointing up and one pointing out – the plan being to see the balloon grow in size through the flight), and we had our commandable standard flight termination payload. The main objectives were to get some more video footage for AREG’s own use, and to conduct a further test of the SSDV system under flight conditions.

Preparations for lift off went smoothly and the balloon train was quickly assembled. Since all of the payloads had been pre-assembled, the weights of everything were already known which sped up the process of getting the flight off the ground.

In addition to the team at Mt Barker, we also had Peter VK5KX and Andrew VK5AKH setup at Palmer on the back of the Mt Lofty ranges ready to receive the SSDV telemetry and relay it to the Internet. We had high hopes that would improve the number of pictures we could capture during the flight.

This launch, like Horus 37, was conducted under challenging conditions with squalls and wind gusts sweeping through the area prior to lift off. The surface winds were proving unpredictable, with periods of calm followed by 40-50km/h winds. We had successfully launched in conditions like this previously, but like all things, our luck had to run out eventually, and so it did this day!

At release, the wind picked up again at the wrong moment. While we avoided the payloads hitting the ground when letting it go, it then encountered a more serious obstacle. A final gust of wind pushed the balloon train into the path of a tree on the edge of the oval. For a second we thought it might just clear it, but no – alas it collected it full on. Then, after an agonizing 20-30 seconds, it freed itself (although not before mashing the polystyrene payload boxes fairly well), only to get snagged a second time in the next street. There it met it’s destruction when three of the four payloads were ripped from the balloon. The RTTY beacon, the SSDV experiment and the camera payload were all left mangled and grounded, while only the balloon cutdown payload continued on it’s flight.

David VK5DGR has “kindly” conducted a post mortem of the event on his blog which you can see here: 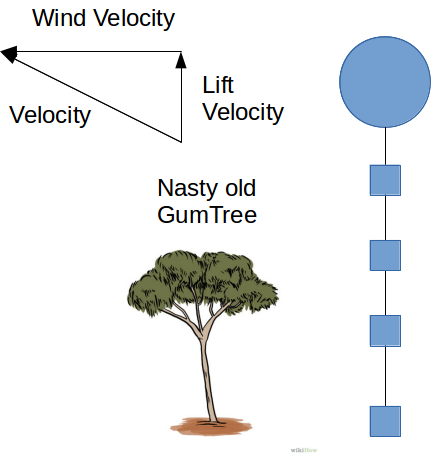 After going and collecting our battered payloads, we regrouped. We still had a balloon in the air to chase. So, with that, we reconfigured our chase cars and switched primary tracking to the backup telemetry feed. Unfortunately this precluded most amateurs from joining in (as the secondary is also the flight termination telecommand system and so is deliberately kept somewhat obscure for obvious reasons). We apologies for not being able to involve everyone this time. Dont worry, however, because there are two more flights planned for the very near future!

After the nasty takeoff, the flight itself went well. Murphy however wasn’t done with us yet. We had decided to bring the remaining payload down early, in order to make recovery as easy as possible. The button was pushed, the commands were acknowledged, but the payload didn’t detach! Hearts sank again as we realized we would have to track it all the way and hope that it didn’t land somewhere inaccessible. The pre-flight predictions were all based on the full payload weight being there. Once three quarters of it was left behind, the ascent rate became much higher, changing the landing zone (based on the original predicted burst height) considerably.

Luck wasn’t completely with Murphy however, and we finally had some when the balloon burst early of it’s own accord. At around 27km altitude, descent began, giving the ground crews a repreive and a relatively easy to recover landing location.

At the end of the day, the teams converged on an empty paddock outside of Sanderston on the Murray Plains and collected the remains of the payload from the flight. Not an ideal day, but one which ended well with a successful recovery. The teams were close enough to actually see the balloon land, something we have missed for a few flights, so at least our tracking and tactical work is at the top of our game.

There are lots of lessons to learn from this flight. The main one will be to reconsider the layout of the payloads on the balloon train. With three 70cm transmitters and one 70cm receiver we had taken to spacing out the payloads considerably. This long train is what compromised the take off, and ultimately lead to the partial failure of the flight. The team is also reviewing our flight manual to consider the surface winds in more detail. Ultimately, even after 38 flights, there is still more to learn. Thats the fascinating aspect of this corner of the hobby!