Tuesday 8 December, the VK5RSB 23 cm repeater was given a little TLC by Colin VK5ACE, with support by Ben VK5BB. 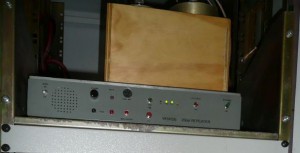 There had been a number of reports that after a little time into a QSO via the repeater, that a noise was heard to be imposed on top of the QSO repeater audio. The noise and its source were not identified at the time and Colin could not account for it?

It was during a QSO between Ben and Colin that the noise was heard to come on and the comment was, “It sounds like a fan spinning up!”
Colin had a “Eureka” moment an said that it was most probably just that! After the transmitter has been on awhile and warms up, the fan cuts in and is most possibly modulating an internal 12 volt supply rail. This required a site visit to see what could be done.

Colin made all the necessary arrangements and scheduled a visit to the VK5RSB site.
Once at the site, the repeater was pulled out and put on a dummy load, the repeater was keyed up and sure thing, when the PA warmed up, the fan cut in and the noise was heard on the transmit signal.

Colin tried a number of electrolytic capacitors across possible points around the 12 volt fan supply and one point was identified where it appeared the noise was suppressed to the point it could not be heard. The capacitor was duly permanently soldered in, the transmitter tested, good no noise, covers put back on and re-tested and all appeared to be good, still no noise!

The repeater was re-fitted in the rack, cavities and antenna reconnected and the system tested to ensure that the fan switched on when the PA got warm and that there was no noise on the transmit output of the repeater. All was good, the site closed up and Colin and Ben departed.

So folks, there it is, all fixed, we hope?

Reports on the operation and observations of the 23cm repeater will be much appreciated.