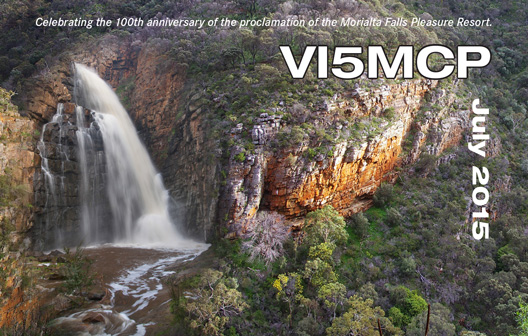 Between the 11th and the 26th of July Members of AREG will be activating a special event station VI5MCP.

The Special event is in celebration of the 100 years of Proclamation of the Morialta Falls Pleasure Resort, which we now know as Morialta Conservation Park.  The 100th anniversary of the park is on Wednesday the 15th of July 2015.

Morialta CP is located in the Hills to the East of Adelaide and is a popular location for Portable operations.  Activations of this park qualify for the SANPCPA – South Australia National Parks and Conservations Parks Award and also for WWFF and VKFF as VKFF-783

The Aim of this special event station is to celebrate the 100th anniversary and to  further promote awareness of portable operations and awards.

We are planning on Activations  from the park over the 2 week period and at the moment we have some confirmed and some tentative activations scheduled, please keep an eye on this post as we will update the schedule in the coming days.

*Note Mode will be SSB unless specifically noted as otherwise.